This building was constructed in two sections. The original east section of this two-story Sioux quartzite building was constructed in 1889. The International Order of Odd Fellows (I.O.O.F) began renting the second floor in 1892 and purchased the entire building in 1896 for $6000. The I.O.O.F immediately removed the "Cheverton Block" namestone and replaced it with one that said "I.O.O.F." In 1910 the I.O.O.F purchased the lot to the west and constructed a nearly matching building The three, second-story windows of the west section have arches of Sioux quartzite, instead of the sandstone found on the original section of four windows. The second floor was connected to make one large hall and the I.O.O.F namestone was placed on the top of the double building.

The first floor remained two separate storefronts. Ben Franklin variety store opened in the west half in 1923. In 1944 they expanded into the east half, making it one large space, which it remains today. The first major exterior remodeling was done to the facade in 1970, completely eliminating the original quartzite stone on the first floor. The wooden canopy was added at that time. 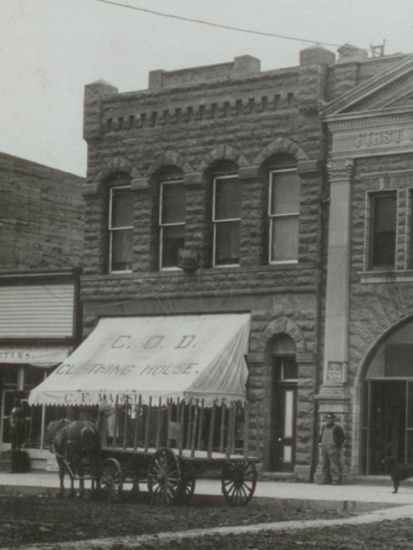