There was an injunction filed against the City of Nappanee in hopes that it would block them from purchasing the property and stop them from foolishly building the Community Building in hard times. A judge concluded that the court could not decide whether or not the plan was foolish or wise, sound or unsound and that the court had no right to interfere in the matter.

It served as a focal point for High School activities such as basketball games, dramas, and other school entertainment until 1958. Commencement was held there from 1934t to1958.

Due to the lack of hot water, the Nappanee High School basketball team did not start practicing in the Community Building until October 1933.

In November 1933, the Nappanee High School Bulldogs won their very first basketball game played in the building. They beat Mishawaka 32 to 21.

The Community Building had deteriorated so badly over the years that the local government felt the cost of repair would be too high. The building was demolished in 1972. 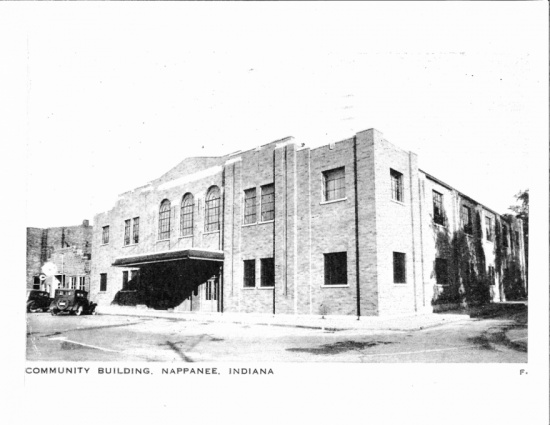