Beyond the Binary: Self-Guided Tour of San Francisco

“For several days in August 1966, transgender women, drag queens, and young male hustlers demonstrated militant resistance in the face of police harassment at a favorite late-night Tenderloin establishment, Gene Compton’s Cafeteria. Part of a local chain, Compton’s Cafeteria at the corner of Turk and Taylor Streets was considered a relatively safe space for transgender women, who often scraped together a living by working as street prostitutes. Cheap residential hotels in the Tenderloin were among the very few places that would rent rooms to them. Protests in San Francisco such as the Compton’s Riot, as well as others by CRH and Vanguard, the first queer youth group founded in 1966, illustrated a new era of gay radicalism that preceded the now far better-known events at New York’s Stonewall Inn of June 1969.” (excerpted from p. 26, Chapter 25: "San Francisco: Placing LGBTQ Histories in the City by the Bay" by Donna J. Graves and Shayne E. Watson LGBTQ America: A Theme Study of Lesbian, Gay, Bisexual, Transgender, and Queer History)

A 40th Anniversary Historical Marker of the Riot can be found at the corner of Taylor and Turk.

This point of interest is part of the tour: Beyond the Binary: Self-Guided Tour of San Francisco 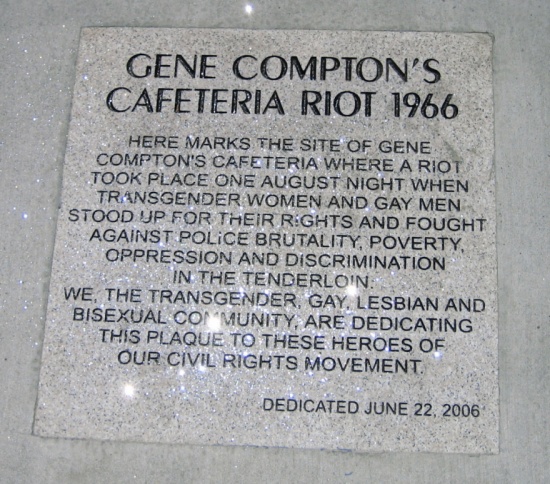