Cornell Cinema was established in 1970 as a university film society but has evolved into a regional exhibition program with a national reputation, open to the general public. It has made Willard Straight Hall's University Theatre its home since 1990.

Cornell’s University Theatre opened in Willard Straight Hall in 1925. Films in the theater were part of the original plan. “The spotlight loft included . . . a motion picture machine of the latest improved model,” the Ithaca Journal reported in November 1925. The first showing, in November 1927, was of a World War I film and Princeton and Columbia football games. Only the best two hundred seats were sold because the 16-millimeter-gauge equipment projected such small pictures.

Feature movies came to the theater in 1936. Ten films from the Museum of Modern Art enlivened the spring semester as a result of the efforts of Walter H. Stainton ’20, Ph.D. ’27. Stainton . . . was committed to the importance of film as an art from. Stainton launched a film-studies course at Cornell in 1936, and his public-outreach program of showing good films on campus became a tradition in the Straight theater.

The University Theatre, like Willard Straight Hall, is a period piece. . . . The murals set the atmosphere of this intimate theater and “are still among the most cherished features of the Cornell campus.” J. Monroe Hewlett (1868-1941), a mural painter from New York, was commissioned to decorate the walls of the theater. Hewlett had acquired a name in New York as an architect, and set designer for the stage and opera. He painted murals at the Columbia University Club, planned two Brooklyn hospitals, and was the director of the American Academy in Rome from 1932 to 1935.

To the right as you enter the auditorium (on the west wall) are Shakespearean scenes with their accompanying verses; to the left (on the east wall) are scenes and verses from the Greek classic theater. The figures form a procession moving toward the stage. When the theater was renovated by Cornell Cinema and the University in 1990, four speakers were hung on each wall as part of the new sound system, which may be distracting to mural viewers.

The classical motif is continued around the top border of the theater with alternating tragic and comic masks (two tragics to one comic). The painted “brickwork” extends to the back of the theater, which ties it in with the whole design and gives a feeling of space. Such illusionistic space devices, called quadratura, were probably used to work against the reality of this Little Theatre with no windows.

The lobby, with its segmental arches and barrel-vaulted ceiling, is in keeping with the medieval theme of the building. A wrought-iron hanging lamp and intricate decorative grillwork are featured on the east wall, showing swords (their handles with grotesque profiles) like spokes of a wheel pointing toward the tragic mask in the center.

For current schedule and ticketing information, as well as special event photos from the past 20 years, visit cinema.cornell.edu. Cinemaphiles can purchase an All-Access pass to enjoy a full semester’s worth of movie offerings on the Cornell University campus. 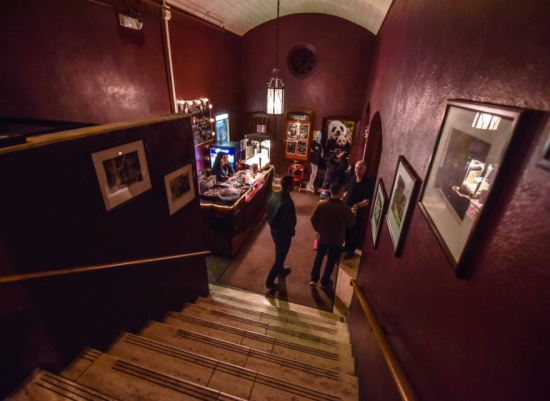 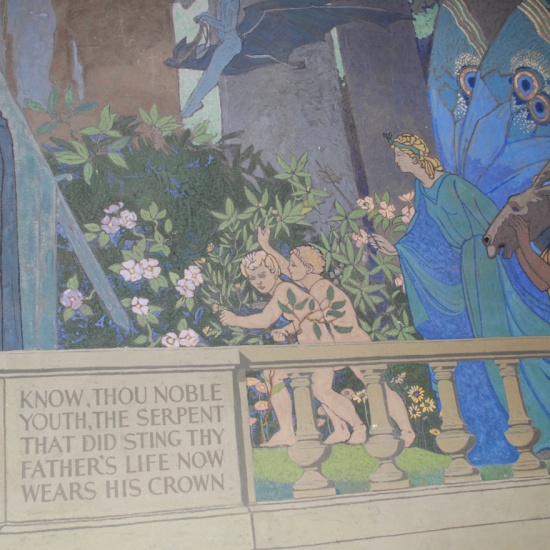 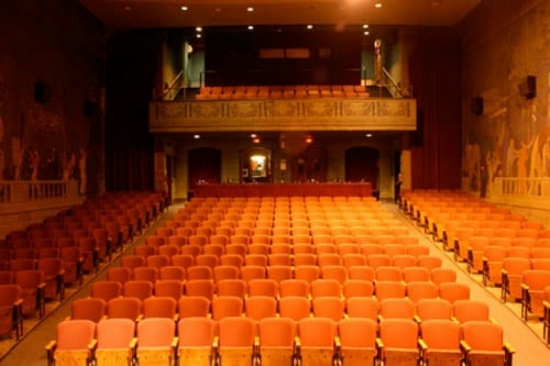 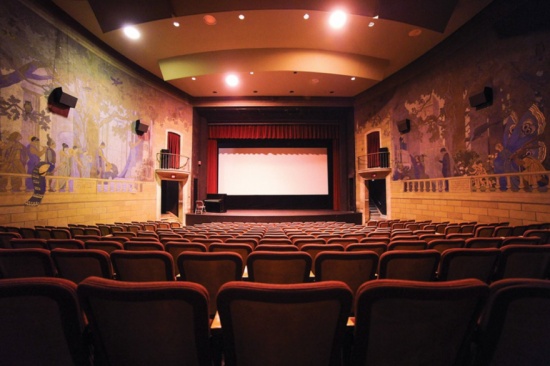