This handsome, two-story brick residence is one of three notable Gothic Revival-inspired designs in Greensboro. Gothic features include a steep cross-gable roofline, a clipped corner turret, lancet attic windows, and tall, narrow windows topped by transoms. Nurseryman Martin C. Dixon built the house on a large parcel of land in the northernmost section of the city in 1875. The house remained in the Dixon family until 1887, and was sold to Colonel A. H. Leftwich. Fifteen years later, in 1903, the house was purchased by T. J. and Annie Leftwich-Murphy. Murphy was twice mayor of Greensboro, serving from 1905-1907, and again in 1911-1917. It stands as one of only three brick houses built in Greensboro in the 1870s that survive today.

The Gothic Revival style is part of the mid-19th century picturesque and Romantic Movement in architecture, reflecting the public’s interest in buildings inspired by medieval design. The Gothic Revival style in America was advanced by architects Alexander Jackson Davis and especially Andrew Jackson Downing, authors of influential house plan books, Rural Residences (1837), Cottage Residences (1842), and The Architecture of Country Houses (1850). This style was promoted as an appropriate design for rural settings, with its complex and irregular shapes and forms fitting well into the natural landscape. Thus, the Gothic Revival style was often chosen for country homes and houses in rural or small town settings such as North Church Street in the 1870s!

The most commonly identifiable feature of the Gothic Revival style is the pointed arch, used for windows, doors, and decorative elements like porches, dormers, or in roof gables. Other characteristic details include steeply pitched roofs and front facing gables sometimes with delicate wooden trim called vergeboards or bargeboards. This home is one of three examples of the style in Greensboro.

This property was listed as part of the Fisher Park National Register Historic District on 29 October 1991 and was locally designated as a Landmark Property 15 July 1982. 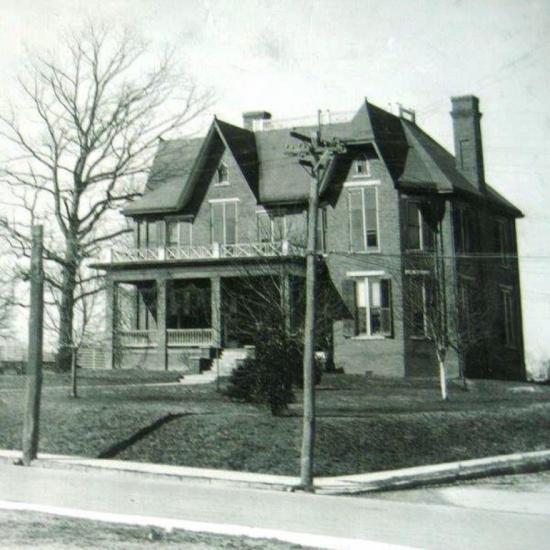