Interested in diving deeper? Read an excerpt from Daniel Kay Hertz' interview with Chicago Magazine about his book The Battle of Lincoln Park: Urban Renewal and Gentrification in Chicago, which addresses many of the issues raised on this tour.

Why write about Lincoln Park? What does that neighborhood represent in Chicago?

Lincoln Park is the poster child of wealthy, white North Side neighborhoods — so wealthy that I don’t think most people think of it as having gentrified at all. It’s just sort of always been that way. But I didn’t choose Lincoln Park for those connotations. It seemed to be the first place that gentrification really happened in Chicago, in the way that we think of it now.

People may be surprised to find out that Lincoln Park was once one of the city’s poorer neighborhoods.

It was in the bottom quarter of neighborhoods in per capita income in 1950 and 1960. Median income in Lincoln Park didn’t get higher than median income in the city as a whole until 1980.

You talk about how Lincoln Park has a symbolic meaning in Chicago. Is this where the North Side as we know it today began?

Definitely. The pattern of gentrification that was established in the ’40s and ’50s in the Old Town Triangle is what has repeated over and over again, now out in Humboldt Park and Avondale and Pilsen.

What’s your recommendation for bringing middle-class homeowners into a neighborhood without displacement?

Another thing is breaking this dynamic, which existed in the ’60s and still exists now, where somebody comes from the suburbs or from Denver or wherever, to the city, and they see neighborhoods where quality of life is really, really high, and they see neighborhoods where quality of life is not high — because schools aren’t taken care of, public safety is an issue, and all these other things — and they’re willing to pay a lot of money to be on the winning side of that divide. Investing in neighborhoods outside of the zone of affluence — both for the people who already live there, and so people who move here aren't deciding that they’re going to bid up prices and push people out of areas close to the quote-unquote desirable neighborhoods. 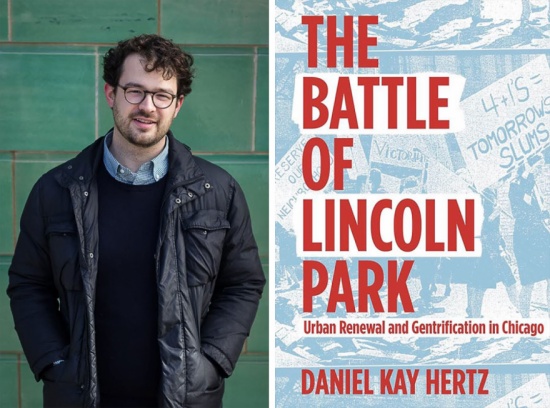 Epilogue
Photo By: Hertz, left, and the book jacket.