The home was begun in 1909 by Arnold A. Fisher of Norfolk, Virginia, his wife Margaret Royster and their young daughter Margarette. Arnold was in the insurance business with his father-in-law George Royster. Tragically, Margaret passed away in March 1913 at the age of 27. Fisher returned to Norfolf and the home was sold the next month for $3,600 to Laurinda Richardson Carl Carlson. Laurinda was a daughter of Lunsford Richardson of Greensboro-based Vicks Corporation, and Carl Carlson was a well-known chiropractor. The Carlsons remained in the home until 1926 at which point the house was occupied by several families until Allie and Gordon Latham purchased the house in 1955. After Gordon’s death, Allie remained in the home until 1980. Anne and Lacy Flora began a renovation in 1992 and then sold the house to Ann and James Barnes. David and Janet Craft acquired the home in 2005 and completed additional renovations and improvements.

One of many impressive residences in Greensboro’s Fisher Park Historic District, the Carlson-Latham House is an example of a subtype of Colonial Revival architecture known as the Dutch Colonial style. Dominated by its expansive cross-gambrel roofline, the two-story frame residence features a wrap-around porch supported by Tuscan columns, diamond-patterned window sashes, and oval windows with keystones in the attic.

This property was listed as part of the Fisher Park National Register Historic District on 29 October 1991 and locally designated as a Landmark Property 20 July 1992. 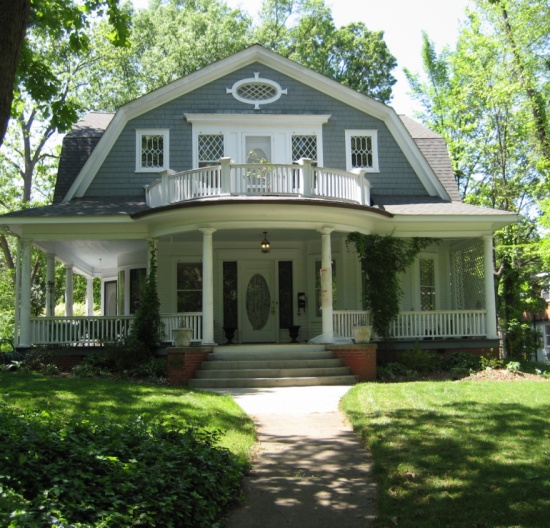