Fisher Park's three religious structures stand within a block of each other on North Greene Street. All were built in the 1920s according to plans supplied by New York City architect Hobart Upjohn. The Neoclassical Revival style was selected for Temple Emanuel, erected in 1923 a block north of Holy Trinity Church (1922). Many synagogues of the period adopted exotic styles that related to Byzantine, Romanesque, or even Moorish antecedents. Greensboro’s Temple Emanuel is one of a handful of designs that relate to Early American history, perhaps inspired by the Touro Synagogue in Newport, Rhode Island. The brick structure features a full-height Corinthian portico with capitals inspired by The Temple of the Winds motif from Rome. Upjohn’s design for the portico is articulated in marble. The interior is equally detailed, with a convex ceiling and delicate wood trim and moldings. The congregation moved to a new location in 2003, but the building has been retained privately as a sacred space for special events.
This property was listed as part of the Fisher Park National Register Historic District on 29 October 1991. 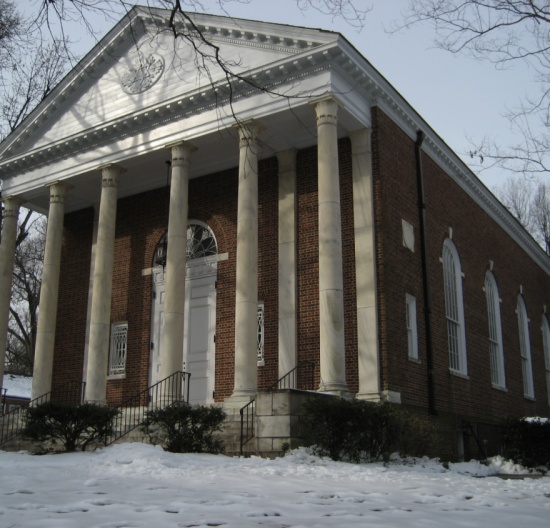