Constructed in three separate building campaigns for the First National Bank, the concrete and steel building features elements of the Neo-Classical and Chicago School. The original Wilder and Wight three-story building, dominated by colossal Ionic columns and highly embellished double-leaf bronze doors at its main facade, was modified in 1926 when a fourth floor was added and a four-story annex to the east was constructed. The marble-sheathed, five-story expansion to the north occurred in 1964. Edward T. Wilder and Thomas Wight studied architecture under the firm of McKim, Mead and White (the architects of the neighboring New York Life Building). Subsequently, Wight became one of Kansas City’s most influential architects. Later purchased by Boatman’s Bank, the First National Bank Building was substantially renovated for the use of Kansas City’s new Central Library, which opened in Spring 2004. 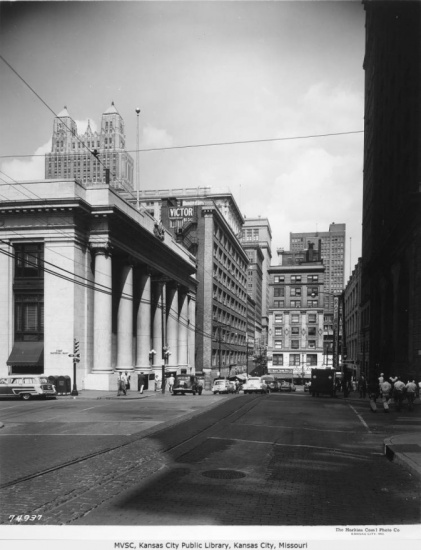