Accounts of early nineteenth century Ithaca describe a rough pioneer settlement prone to lawlessness and opposed to organized religion. Nonetheless, in 1804, under the leadership of Reverend Gerritt Mandeville, a small group of 13 established Ithaca’s first congregation, the Presbyterian Society. After 10 years, a discouraged Mandeville left his struggling congregation of 20, and the church came under the guidance of Reverend William Wisner, a commanding leader whose perseverance won the community’s respect. By 1827 the congregation had increased to nearly 200.

The first Presbyterian meeting house was built in 1816 on a large parcel deeded to the church by Ithaca’s founder Simeon DeWitt, who decreed that the property’s southern portion be preserved as a public square. In the mid-1850s it was agreed that maintenance of the Public Square, now DeWitt Park, would be the responsibility of the village, a legal agreement that remains in effect today. The original meeting house cornerstone is on display in the vestibule at the First Presbyterian Church's North Cayuga Street entrance.

A notable accomplishment of the early church was the sponsorship in 1834 of the missionary work of Dr. Samuel Parker and his associate Dr. Marcus Whitman in the Nez Perce Indian country west of the Rocky Mountains. A white marble tablet honoring Dr. Parker and Dr. Whitman is located in the church vestibule, along with a stone monument on the church’s south side.

In 1853 the burgeoning congregation replaced the meeting house with a Gothic Revival-style church designed by James Renwick, architect of St. Patrick’s Cathedral in New York City. By the end of the century the congregation had again outgrown their church, and, in mid 1899, embarked on a two-and-a-half year campaign to construct a new church.

The selected architect for the third and current church, J. Cleveland Cady of the New York firm of Cady, Berg and See, was challenged to construct a building for the “Modern Church” described as a multi-functional organization which, in addition to religious services, conducted social events, prayer meetings, Bible study, Sunday school programs, and other related activities.

Cady designed the church in the Romanesque Revival style, the hallmarks of which include medieval references such as rough cut stone, deep arched entrances, and paired and grouped arched windows. The first service in the newly completed auditorium was held in October 1901.

The one-hundred-foot bell tower with its “slit” windows also recalls the character of medieval architecture. The church’s buff colored Ohio sandstone exterior is trimmed with Indiana limestone. Overall, exterior decoration is intentionally minimal, in keeping with the overriding stylistic objective to visually unite the structure with the natural surroundings and to create a combined sense of solidity, massiveness, and repose.

The western apse contains a series of stained glass windows designed and probably fabricated by the firm of Maitland, Armstrong and Co. of New York. Windows with a variegated, streaked, and opalescent glass resemble the highly popular and much copied style of Louis C. Tiffany’s studio. In contrast to the dark intimacy of the apse, the expansive view into the auditorium reveals diffused light streaming from tripartite leaded glass windows in the side aisles and dormer windows above. The dominant feature of the space is the enormous barrel-vaulted coffered ceiling that rests on four golden-colored “marbleized” columns with Byzantine capitals.

In 2001, a major renovation of the sanctuary was begun with the purpose of accommodating the space to take on a new organ console and to improve acoustics. Carpet was removed, tile installed, pews repositioned, new lighting added, and the entire chancel area was rebuilt to function more like a stage with the choir loft centered in the back of the chancel. A special construction below the façade pipes allowed for postiv pipes. A different arrangement of the antiphonal pipes was added in the narthex and a large organ (and movable) console now sits in the chancel. The organ (Stephen Russell/Vermont) features four manuals, 84 ranks and almost 5,000 pipes, many of which are behind the chancel in a constructed 2-story process reaching to the ceiling. The narthex chapel was then finished to allow for all windows to be visible and to permit space for small services.

Social and meeting rooms are located in the lower story and include the cozy Fireside Room. The unusual paneling in this room is fabricated from the walnut pew doors salvaged from the 1853 church; holes from the fasteners of subscription plaques date from the early church practice of renting pews.

The cornerstone, laid at the building’s southwest corner in May of 1900, displays the dates of all three edifices of the First Presbyterian Church--an emblem of its rich history and a reminder of its place in the Ithaca’s early development.

The First Presbyterian Church is listed on the State and National Registers of Historic Places and located within the locally designated DeWitt Park Historic District.

This point of interest is part of the tour: Religious Buildings in Downtown Ithaca 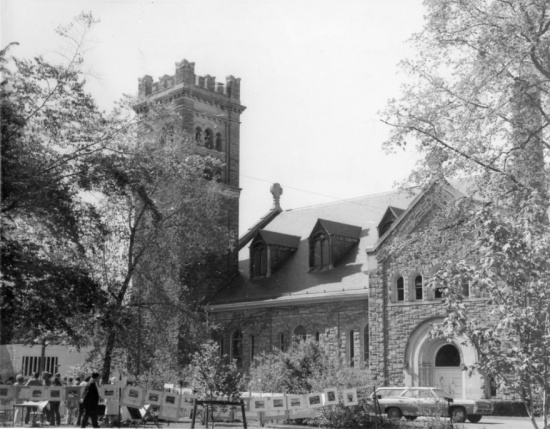