The church at 169 William Street was constructed in 1855 by the First Universalist Church, which was organized in 1835. The Universalist Church occupied the building until lack of membership caused the church to dissolve in 1932. The next congregation to occupy the church was the Pilgrim Church which purchased the church in May of 1933. Before resuming services the congregation made extensive repairs and alterations to the church. The architect for these alterations was Clyde L. Rounseville, who designed a minister's room inside the church, repaired the balcony, and redecorated the interior in the Colonial Revival style. The most significant alteration was the addition of a new tower, which retained the original base, but incorporated a new lantern and dome. The Pilgrim Church occupied the Williams Street building until it was sold to the congregation of Temple Sinai (1968-1977). From 1979 to 1994, the Frederick Douglass Memorial A. M. E. Zion Church occupied the building. Finally, the building was acquired by Gallery X, an artist cooperative group which currently and owns and operates the building. 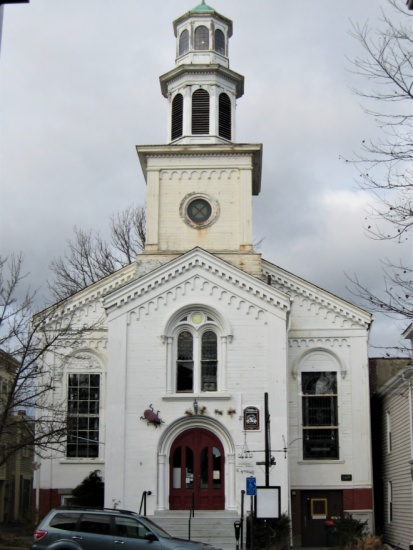