Frank Clark, Fish Hatchery Supervisor This residence was built between 1884 and 1890 for Frank Clark, the son of Nelson Clark, who moved his fish hatchery from Clarkston to Northville in 1874. The fish hatchery eventually became the only federal fish hatchery in Michigan. The house, which had two families living in it at one time in the 1930s, is a good example of a shingle-style house, with slate shingles and asymmetrical facades. While the garage looks like a contemporary construction, it was actually built in 1975 to look like a carriage house and match the home's original.

Currently owned by the local ScoutsBSA District Commissioner and one of the leaders for the Girl Scouts for Troop 7901 who run the superb Mackinac Island Honor Guard Troop (who maintain the flags and tourist information) every year. Each week alternates between Girl Scouts and ScoutsBSA Troops, so if you'd like to have an amazing and fun experience, search the internet for how to apply! 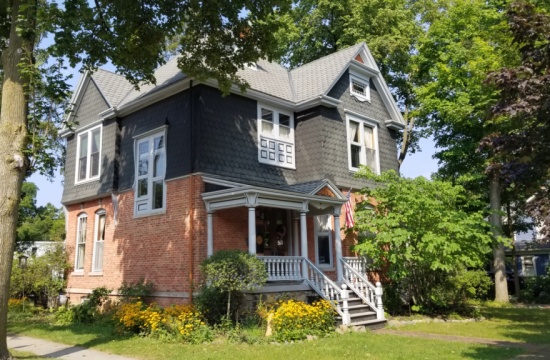