In 1829, this was the site of one of two mills that the Manhard brothers started to take advantage of the stream flowing from Wolfe Lake to the Upper Rideau. It operated as a gristmill, a place where farmers could bring their grains to be ground. It later became Fredenburgh's Furniture Factory. In 1927, James Ryan began construction of a massive three storey hotel which was touted as being "the best laid-out hotel building in Canada". The unique cafeteria featured a water flume, swarming with live fish, which ran the entire length of the building so that parties could land their boats inside the hotel. With 40 bedrooms, those that faced the water featured verandahs and many rooms allowed for fishing from the windows. Sadly, the hotel would burn to its foundations, under suspicious circumstances, before it ever saw its first guest.

In 1949 the hotel ruins were purchased by an architect, Horace Roberts, who built a new house and passed it on to his son Tom Roberts. Tom made bats for professional baseball players and operated TomKat Bats on the site. Changing hands again in 2011, the house underwent massive renovations. One of the original round grinding stones was uncovered during the renovations and is now visible in the courtyard. 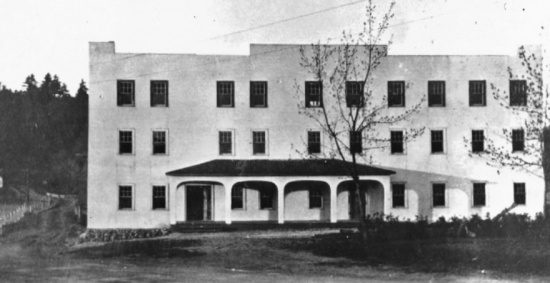