January 1923 – Strong winds fanned the flames of a devastating fire which was believed to have broken out in the upper part of the store belonging to W. B. Blair shortly after midnight. Seven buildings in the heart of the village were destroyed before it was extinguished at daybreak. The total loss of property was estimated to be $30,000. Residents of neighboring municipalities came out to assist, and had it not been for their help, it was possible that the entire village might have been in jeopardy. The fire, considered to be one of the most serious to occur in Leeds county in many years, destroyed the following: The Wardrobe House, a two and a half storey frame hotel, conducted by P.J. McParland, together with outbuildings; the grocery store of W. B. Blair with premises above occupied by the Masonic Order; dwelling of W.B. Blair adjoining; hardware store of McNally brothers; garage of the O’Hara Brothers; frame dwelling of H.C. McEwen; millinery store of Miss Pauline Mulville. The cause of the fire was unknown. It was discovered at about 12:15 a.m. at the premises of W.B. Blair, above which a Masonic gathering had been held that night. The various buildings destroyed were located on Bedford and Church streets. 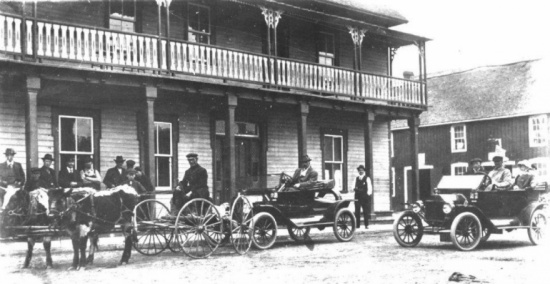