Galusha Pennypacker, a native of Chester County, Pennsylvania, became at age 22 the youngest general to serve in the Civil War. After the Civil War he served in the South and on the western frontier before retiring to Philadelphia. The General Pennypacker Memorial Committee sponsored this monument in collaboration with the State Art Commission. The basic concept was developed by Charles Grafly, an instructor at the Pennsylvania Academy of Fine art who had studied at the Ecole des Beaux-Arts in Paris. In addition to his sculptures for the Smith Memorial, he had created a massive statue of General Meade for Washington D.C. But Grafly died before the Pennypacker Memorial could be completed. The project was taken over by his student Albert Laessle, who was already known in Philadelphia for his Billy in Rittenhouse Square and hisPenguins at the Zoo. In keeping with the Beaux-Arts tradition, the monument portrays the youthful general in classical costume. With energetic determination the figure strides forward on top of gun carriage flanked by two tigers.

Click here to the listen to the Museum Without Walls™: AUDIO program for General Galusha Pennypacker Memorial 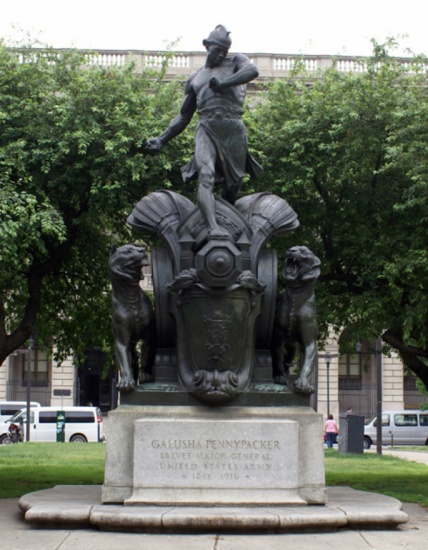