George and Virginia McGraw arrived in Punta Gorda from Lakeland, FL sometime after 1928. They opened a small filling station and convenience store with a soda fountain called McGraw's Place, at the corner of Tamiami Trail and Acline Road. In the 1930 Punta Gorda census, George is listed as a 55-year-old grocery salesman and Virginia is a grocery saleslady.

On March 25, 1931, George McGraw was killed in a shoot out. Virginia was the only witness and told a bizarre story of "an unidentified negro's attempt to rob" the station. "She said the negro entered the filling station, forced her and her husband into the bedroom of their home behind the station and there shot McGraw as he reached for a revolver under his pillow. Mrs. McGraw rushed for a door, was shot at by the negro, but escaped unharmed. Whirling on McGraw, the negro emptied his pistol into the filling station operator's chest, then seized McGraw's own revolver and fired five more bullets into his body as he lay on the floor. Almost dead, McGraw reached his shotgun in a corner and fired a single charge into the negro's head as the latter turned to leave. The negro died instantly."

According to local legend, Virginia and her accomplice Dick Windham ran a bootleg operation behind the gas station which led to the filling station's nickname of Bucket of Blood. Bucket of Blood referred to Virginia's so-called Strawberry Wine which she made in big galvanized steel wash tubs. First she boiled water and then added a gallon of strawberry syrup and five gallons of moonshine to each wash tub. She stirred it with a broom handle, and then bottled the 70-proof concoction to sell. Many believe George McGraw was killed by Dick and / or Virginia because he opposed their illegal bootleg operation and possibly suspected they were engaging in an extramarital affair. Dick Windham was married at the time to Helen Koon (Helen is buried about as far away as she could get from Dick in Plot 261). Years later on April 29, 1946, Dick and Virginia were married.

All three of these people are buried side-by-side in plot 70. George is on the far right, Virginia on the far left, and homewrecker Dick, in between in death as in life!

The story Bucket of Blood in the book Ghost Stories of Punta Gorda is based on this true story. Available locally at Sandman Book Company, Copperfish Books and online at Amazon.com 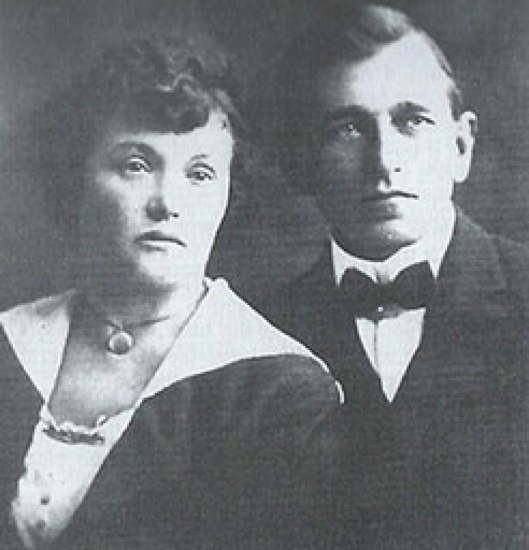