Early in the morning of February 22nd, 1864, a young man named Florence Donahue was returning to his home after being granted furlough from the Union Army. As he crossed over the bridge, he noticed a light reflecting in the ice-filled creek, and when he looked back up, saw flames through the cellar window of the corner store. He immediately ran to raise the alarm, probably by knocking on neighbors’ doors with shouts of “Fire!”

The fire spread up Union St. and down towards Main St. Because the town didn’t yet have an organized fire company. Residents formed bucket brigades, passing water from the creek to throw on the flames. Despite their best efforts, the fire ravaged most of Main Street east of the corner store, up to the Presbyterian Church. The church, legend has it, was saved by wet carpets thrown on the roof, held there by an eight year old boy.

At the time, the origins of the fire were a mystery. Mr. Bower, the owner of the corner store, was originally a suspect. When the fire started, he rushed over to rescue some books, conveniently placed right inside the window where he could reach them. As stories of his efforts to rescue other residents and their belongings spread community suspicion soon abated. Multiple times, Mr. Bower put himself in great danger, going into burning buildings to rescue money and other valuables for his neighbors.

Many years later, Mr. Bower confessed to starting the fire on his deathbed. He started the fire in his own cellar, intending for only his shop to burn down. He was horrified by the rapid growth of the fire and community destruction, and did everything he could to help. He never shared his motives for why he wanted to set his own building and shop goods on fire.

A possible motive for arson was the temptation of insurance money. After the fire, Aetna Fire Insurance Company generously provided those in the town who had lost their homes or businesses with the funds to rebuild, including, it is assumed, Mr. Bower. There was so much insurance money in the town that it caused a building craze, and Main Street was rebuilt in no time at all. 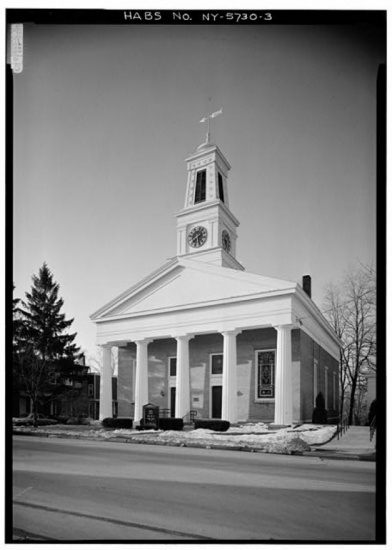 Great Fire of 1864
Photo By: Library of Congress