At one time it was also known as Stahly Hall as well as Hartman Hall. It was the site of early town council meeting.

There were also plays, and other entertainment held in Hartman Hall. Funerals were held there. Church held Sunday School in the Hall but they eventually moved to Coppes Hall when that opened.

Downstairs was Hartman Brothers. At one time Hartman Brothers was one of the biggest general stores in Elkhart County. It was owned and managed by brothers Jacob, John and Tobias.

The store originally started in Hepton in 1871 with Jacob and their other brother, Samuel. In 1873 the store transferred to Locke and in 1875 Samuel disposed of his interest in the store to his brother John and Tobias. In 1876 the brothers started doing business in Nappanee. It was not until 1879 that their entire stock and interests moved from Locke to Nappanee. Jacob and Tobias ran the Nappanee store and John had stayed in Locke. 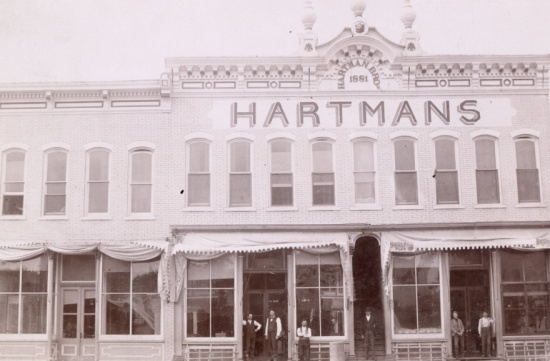