Hendricks Chapel sits symbolically at the center of the campus as a gathering place for people of all faiths. Throughout the year, the Chapel also hosts renowned speakers, concerts and special events, and many alumni weddings. It's here that you'll find the Office of Community Engagement, and People's Place, a student-run coffee shop.

Francis Hendricks was a state senator, SU trustee from 1895 until his death in 1920, and Forestry College trustee from 1913 to 1920. His donation called for a chapel honoring his late wife Eliza Jane that would serve all faiths. He also stipulated the name "Hendricks Chapel" in his will. Seating 1,450 Hendricks was the third largest University chapel in the country at the time of its construction. The pulpit was the gift of the Class of 1918. The original Aeolian organ, the gift of Kathryn Hendricks, niece of Francis Hendricks, was replaced in 1952 with a new organ built by Walter Holtkamp. 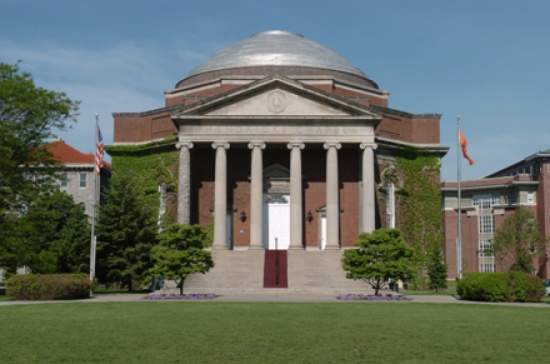