An unexpected tragedy struck the US military in the midst of World War II right here in Newark, Ohio!. On September 8, 1942, a B-25 Bomber crashed on historic Hudson Avenue.

The Bomber, piloted by Colonel Douglass Kilpatrick, experienced structure failure of its left wing as it flew over Newark around noon on a day obscured by clouds and heavy rain. The plane, carrying passengers from Dayton to New York State, began to come apart, losing pieces as it flew. It narrowly missed colliding with the Old County Jail as it turned north to pass over the square. The pilot and copilot ejected just before it crashed at the corner of Hudson and Wyoming Streets. Wreckage from the fiery crash spilled along both streets. The four passengers aboard died instantly. The pilot and co-pilot fared no better, and perhaps worse than their comrades. Colonel Kilpatrick fell through the roof of an office building at the corner of Clinton and Locust Streets, and his co-pilot, second lieutenant A. C. Lauver, died on the impact on the loading platform of the freight office of the B&O Railroad. Two local women also died in the crash: Dollie Campbell, who happened to be walking nearby, and Jane Weston, who owned the building struck by the airplane. Eight people, six from the plane and two from Newark, died in what remains Licking County’s worst aviation disaster.

Over the years, people who live on Hudson Street have reported hauntings. The owner of a building damaged in the crash claimed that her home remained haunted by the spirits of the deceased, with wall hangings tilting and moving unexpectedly, lightbulbs suddenly burning out. Her son reported seeing the ghost of Colonel Kilpatrick in a mirror. If hauntings are tied to location, then the bomber crash presents a unique scenario; the death and destruction that spread out from the corner of Hudson and Wyoming Streets, with two deaths occurring blocks away and no extant structure on which to focus, leaves open the possibility of untethered spirits that are free to roam the neighborhood in which they died.

Image 2: Map showing the location of the airplane crash at Wyoming and Hudson Streets, with marks indicating the places where its pilot and co-pilot landed. 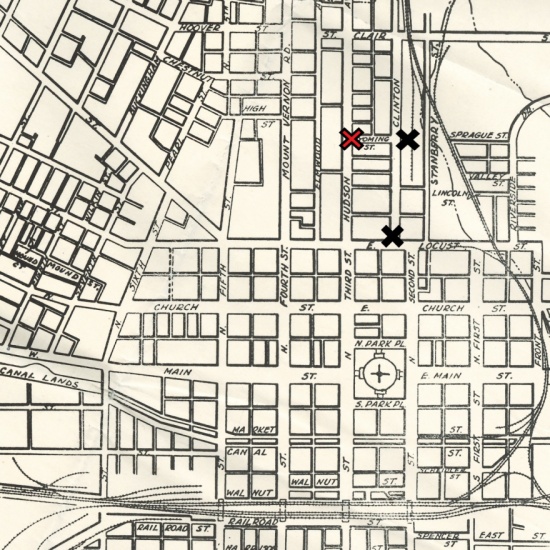 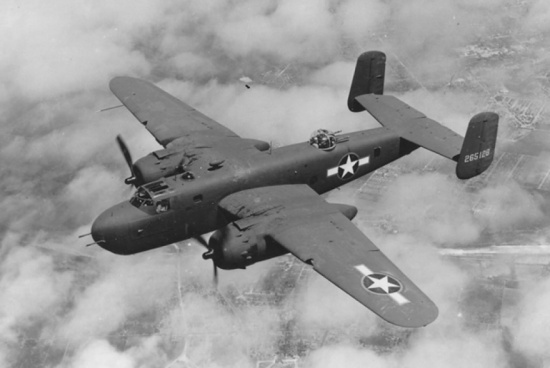