The Indiana War Memorial is the centerpiece of the five-block Indiana War Memorial Plaza Historic District. Originally designed to honor the veterans of World War I, the War Memorial is today dedicated to all men and women of Indiana who have served in all conflicts since, including World Wars I and II, the Korean and Vietnam Wars, the Cold War, the Gulf War, the wars in Afghanistan and Iraq, and various peacekeeping operations around the world. The Plaza contains two museums, three parks, and 24 acres of monuments, statues, sculptures, and fountains in the heart of downtown Indianapolis, making the state’s capital second only to Washington D.C. in acreage and number of monuments dedicated to veterans. It is also home to the national and state headquarters of the American Legion. The Indiana War Memorial Commission operates these facilities in pursuit of its primary mission: to commemorate the valor of sacrifice of the United States Armed Forces, and especially to honor Hoosier veterans and educate the public about Indiana’s role in the nation’s conflicts.

The main design elements closely follow contemporary theories on the appearance of the original Tomb of King Mausolus, the Mausoleum, one of the Seven Wonders of the Ancient World. Initial work on the building began in 1925. General John J. Pershing, Commander of the American Expeditionary Forces in Europe during World War I, set the cornerstone on July 4, 1927. Lieutenant General Hugh Drum, Deputy Chief of Staff of the United States Army, and Governor Paul McNutt dedicated the newly completed Shrine Room on Armistice Day, November 11, 1933. In 1994 it was listed as a National Historic Landmark.

The War Memorial rises 210 feet above street level, and sits 180 feet wide by 270 feet long. The central tower is 100 foot square. The building has a steel frame with poured concrete clad in Indiana limestone. Relief carvings decorate all four of its exterior sides along with freestanding details such as carved lions, massive urns, and magnificent bronze work. A stepped pyramidal roof tops the vertical mass of the shrine. Small lantern windows are at the apex. Each side of the main building has six columns set high in the walls. Above the columns is a frieze with six large sculpted figures representing, from left to right: Courage, Memory, Peace, Victory, Liberty, and Patriotism. The main entrance is on Michigan Street, where a disability ramp is also located, while access to the balcony level from Vermont Street is via a single monumental stairway rising directly from the sidewalk.

Visitors find carved in stone above the main entrance on the north side, the words “Erected to commemorate the valor and sacrifice of the land, sea, and air forces of the United States and all others who rendered faithful and loyal service at home and overseas in the World War, to inculcate a true understanding and appreciation of the privileges of American Citizenship, to inspire patriotism and respect for the law to the end that peace and good will may prevail, justice be administered, public order maintained and liberty perpetuated.” 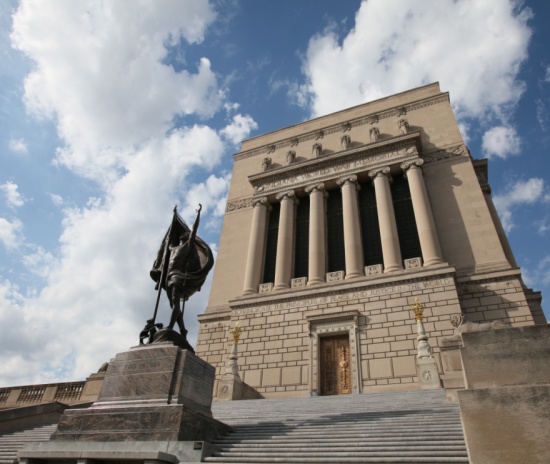