This building is a well-preserved example of a once common commercial building type erected in the center city and demonstrates a growing appetite for nationally popular architectural styles in the city at the turn of the twentieth century. The three-story brick building occupies the site of Cyrus P. Mendenhall’s imposing residence “The Elms,” and was erected in 1902 when the house was reconstructed to 205 West Washington Street (and then reconstructed in Fisher Park). The J. W. Scott and Company wholesale grocery operated in this location until 1970. Attributed to Greensboro-based architect Orlo Epps, the building features segmental arched windows with springer stones, stone sill and lintel courses, and a modillion cornice. A central pavilion features a central gable above a fanlight. The building was restored around 1990 when it was adaptively reused as office space. Private. 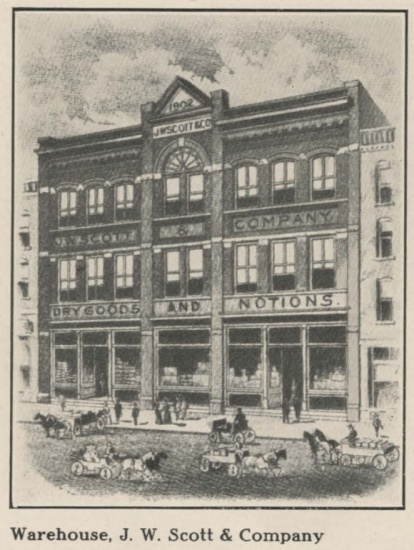