Constructed in 1919, the Galloway House is an early example of the English Tudor Period Revival style designed by prolific and prominent local architect Harry Barton. The grand façade incorporates details such as fieldstone, rough-hewn false timbering, quatrefoils, and exposed rafters to evoke a medieval English manor house. John Marion Galloway was a tobacco broker in the prosperous era of cigarettes, and was said during his lifetime to be the largest grower of Brightleaf tobacco in the world. He was instrumental in establishing the Co-operative Tobacco Marketing Association in North Carolina, a grower’s organization that sought more lucrative prices for tobacco in the state. Later, the house was the residence of the Kreel family. The mansion remains today as a tangible reminder of an important chapter in the growth of Greensboro as a center for the tobacco industry.

The Tudor style of the Galloway House blends several Medieval English building traditions to create a picturesque appearance. The facade of the house has two projecting bays on either side of a central front porch. The porch is covered by a shed roof supported by exposed rafters and massive tapered granite piers. Other features include dormer windows with lattice panes, false timbering in the attic dormers, and a heavy modillion cornice. The entire home is roofed using red tiles. The stone façade is composed of Mount Airy Granite, a popular local building material. 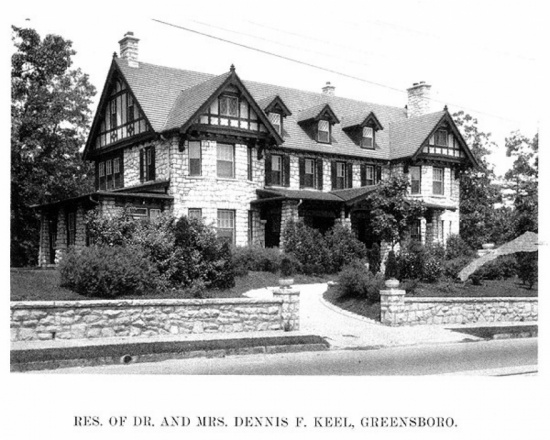