As you look across the street, the white house to the left of the brick home was another property owned by the Scott family. On 10 April 1893, W. F. and Fondelia Griswold sold lot 9 in the Griswold East Side Addition to James Scott for $400.00. This was one of the first lots sold in the new addition, and was sold before the plat was officially recorded. The $400.00 consideration for this lot 50 feet wide and 260 feet in 1893 indicates that there was a house on this lot at the time of the conveyance from W. F. and Fondelia Griswold to James Scott. Frank Corbin’s note indicate that "James Scott divorced his first wife and later married Ada Kiner, a founder of the African Methodist Church on Plymouth Street." He further reported, "They built a frame house on the north side of Granville Road near Plymouth which is still standing."

James Scott placed an advertisement in the newspaper in February 1897 indicating, "House Cleaning Time will soon be here. I am better prepared than ever to do all kinds of house cleaning, white washing, etc. James Scott. Also caterer for parties, Worthington, Ohio." James Scott died in 1918. The 1928 Worthington Directory showed Ada Scott living at 184 East Granville Road. On 8 December 1893, Ada Scott conveyed this property to her niece Ada Kiner Thompson and Forest A. Thompson. On 2 November 1938, Ada Scott died at the home of her niece, Mrs. Forest Thompson on East Granville Road. The obituary indicated she had been born in New Hope, Virginia in 1859, her parents being enslaved. She came to Worthington about 1895 to serve as a nurse for Mrs. Henry Fay. Learn more about the Kiner family history at stop 14. 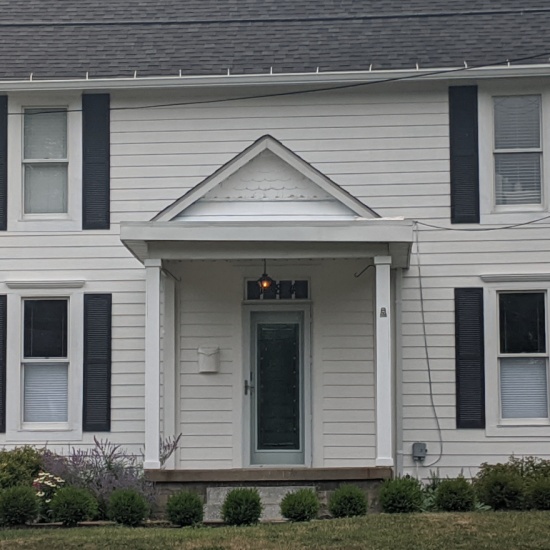