Point of Interest Number 3. Having stopped at Number 51 High Street opposite the United Reformed Church, look across the street at the small house (Number 44) between the United Reform Church and the Hairdressing Salon. See image above.

Number 44 was the home of John Millward, a famous lace designer, who specialised in designs for the crowns of babies’ caps, during the first quarter of the 1800s. Around this time the local lace makers were feeling the effects of the competition from the machine made lace in Nottingham. However at first, the machines couldn’t copy anything with a round shape such as babies’ caps. So lots of these babies’ caps were hand made and many exported to America.

John Millward also gave evidence to Parliament of the piracy of lace pattern designs. He was still winning awards for his designs at the time of the Great Exhibition in 1851. An image of John Millward and his friends is shown above. This image shows John, the tall gentleman, wearing a high ‘stove-pipe’ hat, and the cut-away tailed coat of the day. He had some sort of foot disability and was nicknamed ‘Dabfoot’ in the town!

The entry alongside his house, which goes through to East Street, is still known as ‘Mill’ards Entry’. Over the years Olneyites have dropped the ‘w’ in ‘Millward’.

Next, walk another 75 metres further along the High Street until you reach to No. 55, where The Lace Factory (Point of Interest Number 4) is clearly visible across the Street. 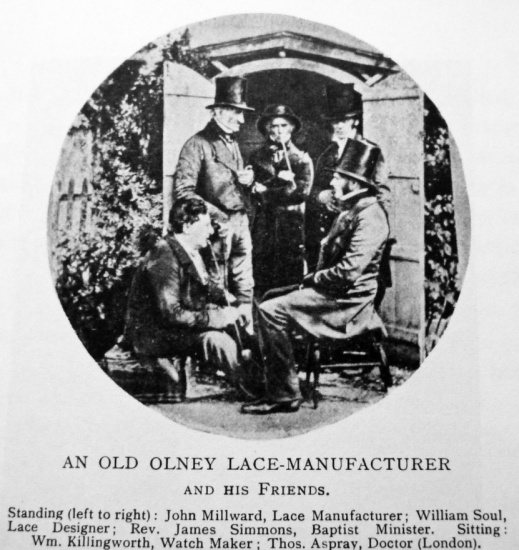 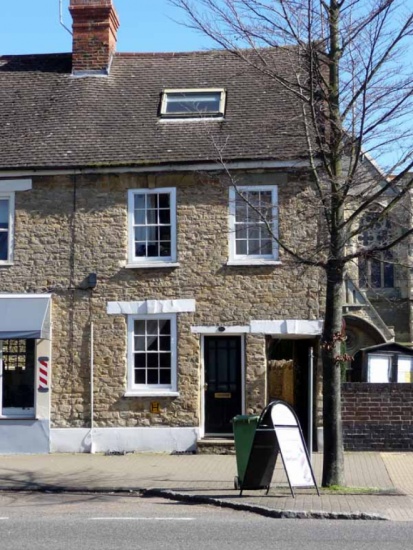