The John N. Smith Cemetery was officially established in 1880 when members of the Colored Methodist Episcopal Church(currently known as the St James AME Church) purchased the land for $15. The land, which had been owned by three former slaves, had been being used as an unofficial burying ground for several years. The oldest tombstone in the cemetery belongs to John N. Smith who was buried in 1874. The cemetery is named in his honor. The cemetery was the only African American cemetery in Southport for over seventy years. Former slaves, freemen, business owners, farmers, mariners, politicians and military veterans are buried here.

There are 479 grave markers. Ground Penetrating Radar has shown that there are an additional 1243 unmarked graves in the cemetery. It’s likely that many of the unmarked graves originally had wooden or ballast stone markers that have disappeared with time. Traditionally many of the graves were adorned with conch and oyster shells, as is consistent with the African American Gullah Geechee culture. This cemetery is the final resting place of veterans of every American war since the Civil War. In fact, two Civil War veterans are buried here. Every year, the city of Southport holds its Memorial Day Celebration in this cemetery. 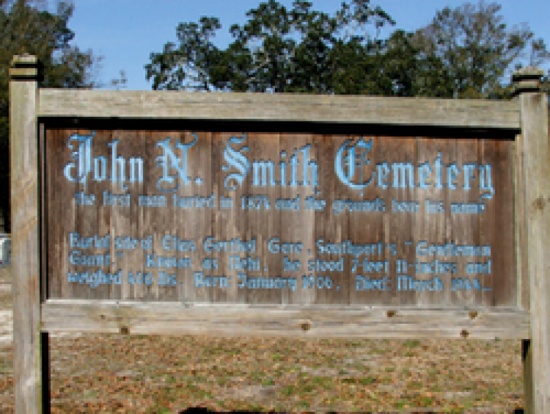