The Joy of Life fountain is a remnant from the second major phase of change in East Liberty. The Urban Redevelopment Authority (URA) commissioned it in the 1960s to act as a centerpiece for a new outdoor pedestrian mall. Like many other American cities, Pittsburgh suffered population loss and disinvestment after World War II due to suburbanization and deindustrialization. As a commercial district, East Liberty especially struggled as fewer people did their shopping within the city. Local business leaders asked the URA to conduct an urban renewal project to revitalize the commercial district. Beginning in 1965, the URA demolished nearly one third of East Liberty's commercial core in order to install a pedestrian mall and a traffic circle. Unfortunately, the well-intentioned project hastened the decline of the business district. By the 1970s a majority of the businesses had closed or left the neighborhood, and the city acknowledged that the project had failed.

In the 1980s, the city took steps to dismantle the pedestrian mall and reopen the streets to traffic. The Joy of Life fountain was moved to its present location behind the East Liberty Presbyterian Church. The community wanted to keep the fountain in the neighborhood, but it’s original position made it a traffic impediment when Penn Avenue was reopened to cars.

The fountain’s installation in 1969 coincided with Pittsburgh’s civil rights movement. After Martin Luther King Jr.’s assassination, the African American community in East Liberty and other parts of the city protested racial inequality. Students at the local Peabody High School demonstrated in 1968 over the exclusion of African American history in the curriculum. The fountain's artist, Virgil Cantini, wanted to express the idea of community and oneness with this work of art.

This point of interest is part of the tour: East Liberty Commercial District Walking Tour 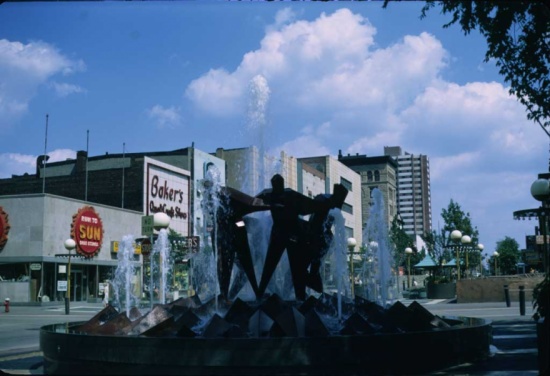