Knights of Labor Miners (KOL) Park- Located in the green space, between Tecumseh Theater and Black Diamond Tavern, along East Main St, KOL Park was created as a result of a Preserve America grant in 2003. The park pays homage to the Knights of Labor (KOL) Movement that played an important role in the union organization of Hocking Valley miners throughout the early years of the region's coal boom era of the 1870s. The KOL was the first major labor union organization in the United States. The KOL operated by two fundamental philosophies: "An injury to one is a concern of all" and “Labor is the first capital." Located at the center of the park is Alan Cottrill’s sculpture "Hocking Valley Coal Miner." The miner is depicted in the "miners crouch" with his pick-ax pointed toward the future. If you look closely, you will notice 3 equilateral triangles located at the base of the sculpture, representing the KOL ideas of labor, capital, and everlasting truth. Please pay close attention to the token with the inscription " No.169," as the number is a tribute to Shawnee's local KOL chapter, which was the second-oldest chapter in Ohio at the time. This token is a way to further represent the secretive nature of the KOL because miners that joined the union movement were strongly discouraged to join unions by mine operators and mine owners. Joining a union movement, such as the KOL, put the miner in a perilous situation, as they could be fired for doing so. Continue to make your way East along Main St toward the Black Diamond Tavern, to the right of the park. 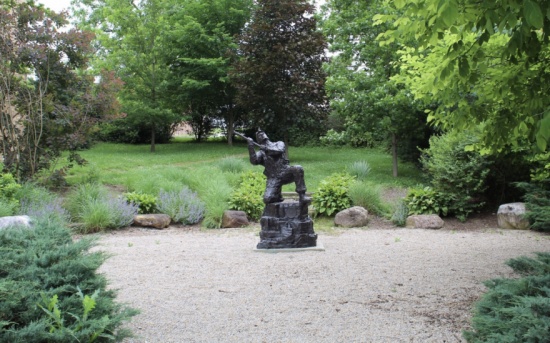