This modernist brick-and-concrete structure is the earliest surviving enclosed shopping center in Illinois, and was designed in 1964 by Victor Gruen, one of the most influential retail architects and planners of the twentieth century. It also is the nation’s first enclosed shopping mall designed and integrated into the downtown of a small city. In 1961, the Urbana Central Development Company acquired and cleared a 9-square-block (14 acre) site just south of the business district, demolishing several residences and small commercial buildings in the process. The mall’s main interior feature is a two-story “High Court” (52 x 218 feet) with a beamed and coved ceiling. Extending from this central interior space, in a pinwheel-shaped plan that reflects the vacated street grid of Broadway and Green streets, are three single-story covered walkways lined with additional retail space. A two-story department store borders the east side of the court. Along the west are retail storefronts and a second-level balcony containing office space. The mall’s light brown brick exterior contains little external embellishment in keeping with Gruen’s desire for “quiet architecture” intended as a deliberate contrast from the bright lights and signage of the era’s commercial strips. Natural illumination comes from a skylight extending the length of the court. Exterior display windows, limited to the anchor store entry, were purposefully eliminated in the design, intentionally creating a draw of people into the mall and the interior focused retailers. Supporting piers have been combined with planters to create inner spaces and “walking corridors” of polished concrete.

This building is not counted in the Downtown Urbana Historic District due to its previous listing on the National Register of Historic Places, as one resource with the attached Urbana Lincoln Hotel, for national significance.

This point of interest is part of the tour: Urbana's Downtown Historic District Tour 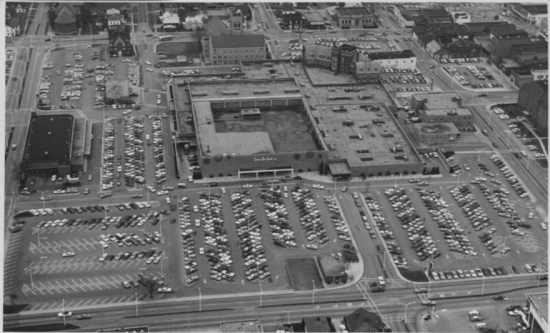