The Linville River Railroad ran from Boone to Cranberry, where it hooked up with the rest of the East Tennessee & Western North Carolina Railroad, affectionately known as “Tweetsie.” Rail service in Boone lasted from 1918 through 1940. The tracks ran along what is now Rivers Street and out to present-day NC 105, eventually leading to Shulls Mill, a large lumber town seven miles southwest of Boone. A sign in front of the restaurant Café Portofino claims that the building was part of the depot, but this building in fact was constructed as a tobacco prize room in 1939 and served for decades as a pesticide warehouse beginning in the 1940s. The actual depot was completed in 1919 and stood closer to the intersection with Depot Street and in the middle of the present roadway. Following the closure of the rail line after the devastating August 1940 flood, the depot building was eventually cut in half and moved to the rear of the nearby bus station. Demolition of its last surviving vestiges commenced in 1976. 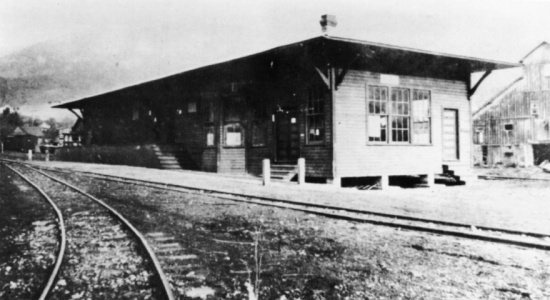