Built in 1908, the Log Cabin was used by the Morrises to entertain friends. Lydia spent many hours on the porch contemplating the stream and woodlands. The building was cool in summer and provided the warmth of a fireplace in the winter. Log cabins were featured at the 1876 Philadelphia Centennial and soon became popular in American estates. With its river-stone cobble chimney, this cabin was similar to the style often built in the Adirondacks – a vacation spot for the Morrises. Victorians saw log cabins as a symbol of civilization’s mastery over the wilderness. At the time, political candidates were considered more likeable if they lived in a log cabin. The Log Cabin was restored in the 1990s and remains an idyllic spot to enjoy the woodland plants in this area. Particularly interesting are spring bulbs and other ephemera and woody plants that include North American natives and their Asian counterparts. 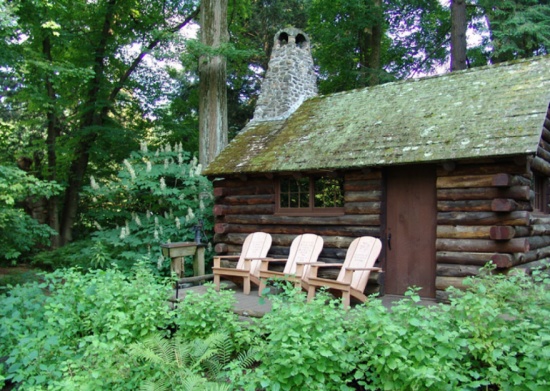