Luffness Carmelite Friary
Lying within the woodland of Luffness estate to the east of the village, are the ruins of a 13th century Carmelite friary. The friary at Luffness is first mentioned in 1335-6 but a recess containing an effigy of a knight in late 13th century armour suggests an earlier date of construction. Oral tradition links the effigy to Sir David de Lindsay, a crusading knight. The legend has it that this knight, mortally wounded in combat, offered a Carmelite monk land at Luffness to establish a friary if would ensure the safe return of his body to Luffness. (see photo 29 in slider above)

The foundations of the friary are quite visible but the associated buildings have almost entirely disappeared. The walls of the friary measure 31 metres by 8 metres with a height of average 0.7 metres, except at the east end on the north side, where the wall is 1.7 meters high. About 100 metres north-east of the church are the remains of associated two fishponds, though now waterlogged hollows overgrown with rank grass. There are no references to the friary beyond 1512.

If visiting the friary please respect the privacy of Luffness House and keep to the access path from the east end of the village. Dogs must be kept on leads. 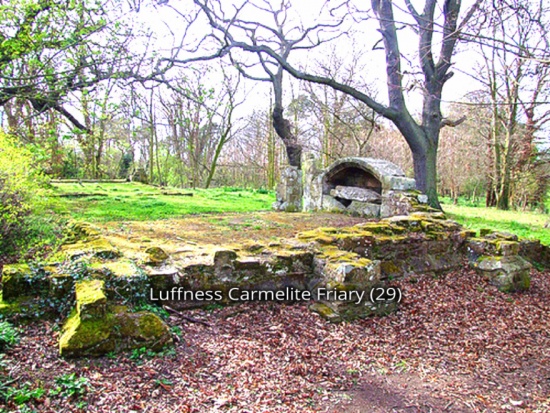