General Meade commanded the Union Army of the Potomac during the Civil War, and is best known for defeating General Robert E. Lee at the Battle of Gettysburg in 1863. Meade also served as military governor for the Georgia district during Reconstruction, and a commissioner of Fairmount Park. He is responsible for designing many of Fairmount Park’s drives, walks, and bridle paths. Following Meade’s death, the Fairmount Park Association (now the Association for Public Art) initiated a campaign to finance an appropriate memorial. Though fundraising was slowed by Jay Cooke’s September panic of 1873 and competition from the Centennial, the Meade Memorial Women’s Auxiliary Committee finally raised the balance and a competition to select an artist began. The artist chosen was Alexander Milne Calder (sculptor of William Penn atop Philadelphia’s City Hall), and he based his rendering of Meade on his own memory, photographs, and the recollections of family members and friends. In 1887, over thirty thousand people watched Meade’s grandsons unveil the Meade statue, which was Calder’s first large-scale bronze and the first major commission project of the Fairmount Park Art Association. General Meade and his horse “Baldy” continue to gaze out across the park landscape in the direction of Laurel Hill Cemetery where Meade was buried.

Click here to the listen to the Museum Without Walls™: AUDIO program for Major General George Gordon Meade

In honor of the 150th Anniversary of the Battle of Gettysburg, Major General George Gordon Meade recently received special restoration treatment through the Association for Public Art’s annual Conservation Maintenance Program. Unique to this restoration was the installation of several re-fabricated elements, including the reins for Meade’s horse, “Baldy.” 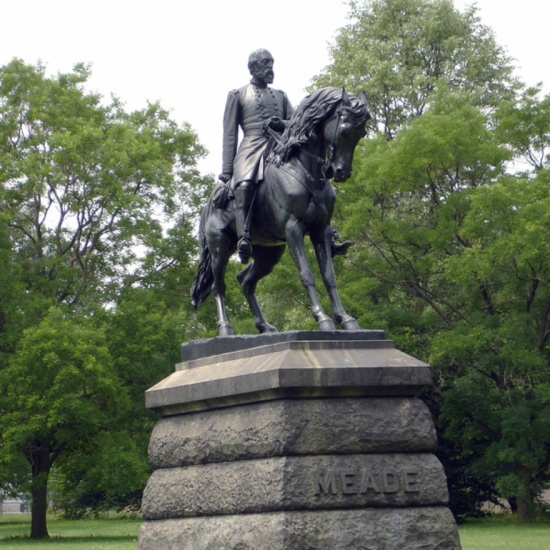