Frank Atwater was the owner of a theater on Owego St. (now E. State St.) in the early nineteenth century. The theater was located behind a jewelry store, and never saw much business, so he converted it into a billiards hall. Fights frequently broke out at Frank's bar, which some attribute to Ithaca's reputation for high liquor consumption. A little after midnight, a bar fight turned ugly, and chairs and lamps were swung and overturned. In the commotion, a fire began in the billiards hall. The fire spread down the streets, burning over thirty buildings. Tragically, many of these buildings had been recently rebuilt after a fire in 1833. Among these buildings was a warehouse owned by a Mr. McCormick, giving the 1840 fire its name.The authorities offered a $1,000 reward to anyone who found the men responsible for the fight. The catastrophe of the fire shook Ithaca residents, who demanded that another fire company be organized. In 1842, Fire Company No. 4 was organized, and new engines purchased for the protection of the village.

Soon after the fire, Henry Walton painted the scene on a banner for the fireman’s parade, depicting young boys and men in tophats helping to put out the fire, and especially to save the Ithaca Hotel across the street from the bar. The banner is on display in the Exhibit Hall of The History Center in Tompkins County.

Images courtesy of The History Center in Tompkins County 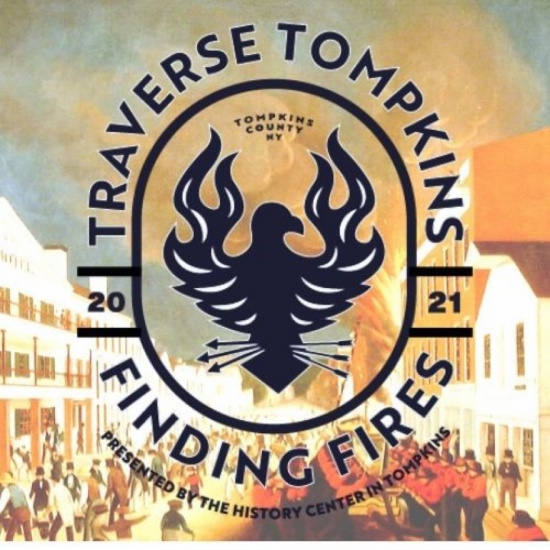 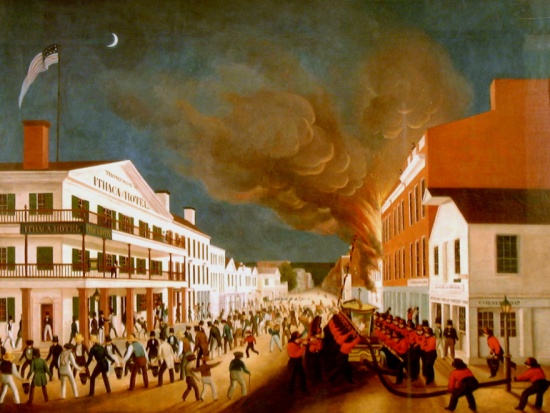