This wet and willowy area to the north west of the church shows the most obvious of the medieval fishponds, but the outlines of several others in the complex are clearly visible. It is thought that these, together with the moated manor house site behind the church were constructed by Philip de Aylesbury in the early fourteenth century. Philip held several manors in the area, namely Bradwell, Broughton, Milton Keynes and Drayton Beauchamp. Fishponds like these are quite common in the Milton Keynes area, and other examples can be found at Bradwell Abbey, Loughton, Simpson, Tattenhoe and Woolstone.

Fish were kept here in the different ponds, so as to be easily caught for 'Fish Friday' meals.

We are indebted to the Buckinghamshire Archaeological Society's Monograph No. 5 by R.A. Croft and D.C. Mynard "The Changing Landscape of Milton Keynes" for the information contained in this section.

As there is no old picture of the fishponds, we have included a map of the area to show their extent. The red cross on the map corresponds with the white cross on the present day picture. There were three large ponds and three smaller ponds (which were probably used as breeding areas for the fish). Fish formed an important part of the diet in medieval times, and it was particularly necessary at times such as Lent when the church forbade the consumption of meat. Fishponds were sited close to both ecclesiastical and lay domestic buildings to prevent poaching, and were often surrounded by a moat. The ponds were fed from the surrounding water table, and of course the whole site is not far from the river Ouzel. There is a watercourse or 'leat' connecting the fishponds to the moat of the Manor house site behind the church. 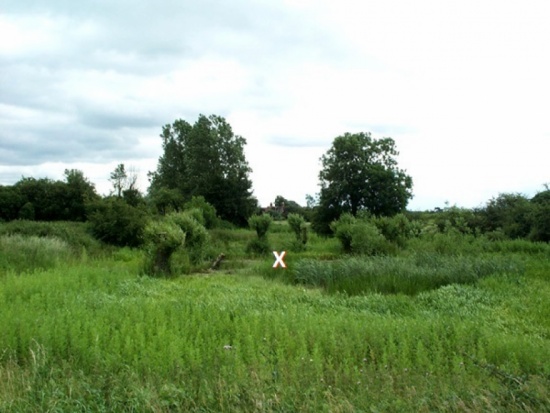 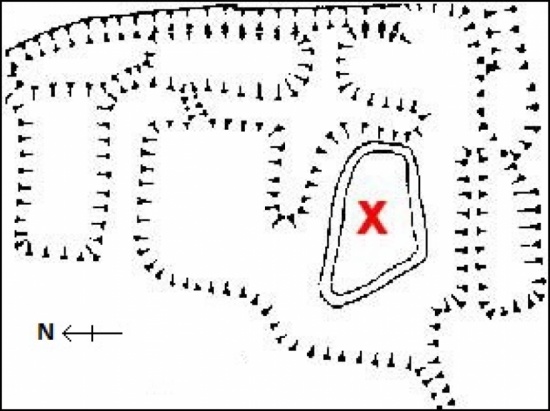