Greenock was a major immigration port in the 1840s and 50s. Scots looking for pastures new following the Highland Clearances and people from Ireland escaping the Great Famine headed for the town and the work opportunities made possible by the expansion of shipbuilding and shipping.

Greenock also played a major role as an embarkation port in the mass emigration of the 19th and 20th centuries. Encouraged by Government incentives, thousands of men, women and children sought new lives in Commonwealth countries and the USA.

The image which is part of the Watt Institutions's collection, shows a painting entitled 'The Emigrants' (1926) by David Shanks Ewart (1901-1965) which shows a couple sitting in a tender boat waiting to take them to the liner in the background before heading down the Clyde. His companion painting 'The Return' (1927) showing the couples's return some years later, is owned by The National Galleries of Scotland.

Continue by turning right and walking along the quayside to Pin 38: Customshouse Quay. 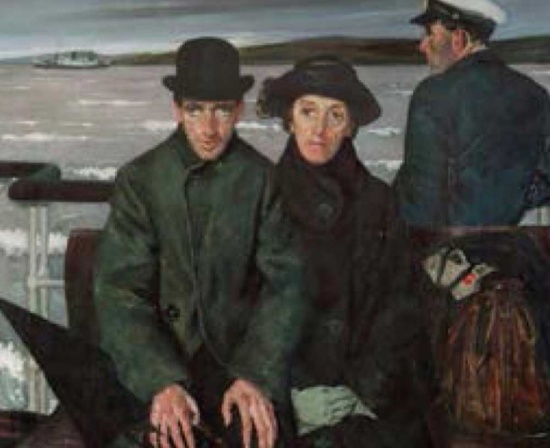 Migration
Photo By: © The Watt Institution