The Minchau family was essential in developing Edmonton's German community. In 1907 eighteen-year-old Adolf Minchau travelled from Germany to Strathcona to help his aunt and uncle with their farm. Simultaneously, Adolf apprenticed under a blacksmith. In 1911, Adolf opened a blacksmith shop at 7711-99 Street, where he was swaddled in the familiar cloth of his homeland; Ritchie was a bustling hub for German settlers. In 1920, Adolf purchased a parcel of land in West Ritchie, an industrial district east of the Strathcona CPR Station. Until recently, remnants of Adolf's original signage cast a ghostly shadow on the building's graffiti-embellished facade. Despite the best efforts of Heritage Forward, a local historical activist group, the structure did not receive provincial significance. In September 2020, Minchau's Blacksmith Shop was demolished. 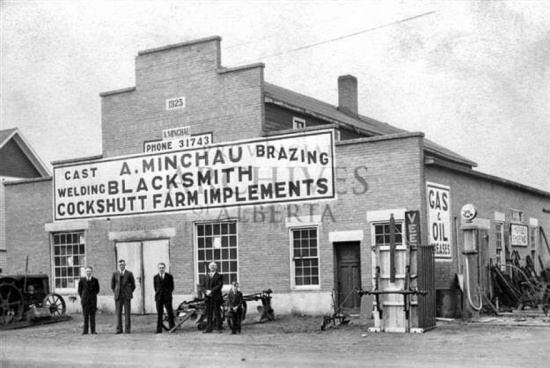