The 25' x 85' Moore Block was built in 1896. The building is designed in a two-story Romanesque influenced style. It was constructed of Sioux quartzite. The 14 gargoyle-type sculptures, carved by local artist and businessman L.H. Moore, make this a one-of-a-kind building. Local legend has it that a nude statue of Eve stood in the niche on the front facade. However, no evidence has been found to substantiate this legend. In 1897 Moore placed what was to be the last sculpture on the building, the lion's head over the stairway under the niche.

The building housed grocery and dry goods, a department store, and a bank. It was a shoe store from 1916 to 1991, with a small time in the 1960s as an ice cream store. In 1938 the storefront was modernized with black glass and aluminum trim. It suffered fire damage in 1966 when the building to the south burned. The second story originally held professional offices and was briefly configured into an apartment.

In 1991, a local organization, "Friends of the Museum," purchased the building, renovated the interior, and replaced two oriel windows on the west facade, before gifting the building to the Pipestone County Historical Society in 2002. 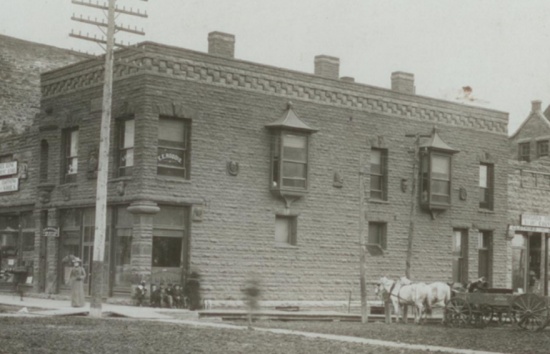