In February 1845, a group of Baxoje performers from what is currently Iowa visited the Assembly Rooms as part of their larger tour of Britain under the management of George Catlin, an American painter and traveller. While Catlin lectured about their culture, the “distinguished Warriors, women and children” would perform their "various War (and other) Dances, Songs, Games &c.” (The Scotsman, 5 Feb. 1845.) These performances were hugely successful throughout Britain, sometimes with thousands of people attending in one evening. Even at the time, though, people expressed their misgivings about the objectification of this group who, traveling under the auspices of Arthur Rankin, presaged the later "Human Zoos." There is plenty of evidence in Catlin's journals that they, in turn, despaired of many of the sights they witnessed, particularly those that revealed the conditions in which the poor lived and the perceived indifference of the wealthy. 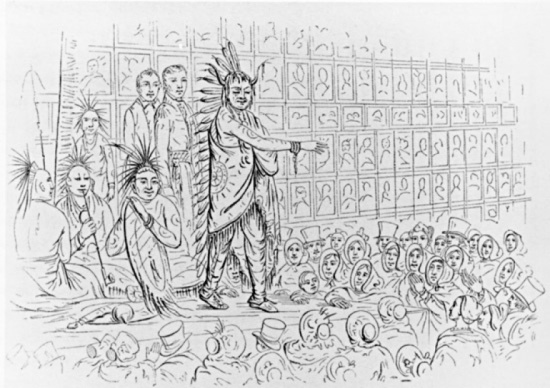