It is unknown as to how this creek got its former name, Squaw Creek, though the term is offensive to many Native Americans today. Urged by tribal elders, the process was undertaken to change it back to its older name as listed in the 1854 Treaty, Nolands Creek, as one of the reservation boundaries to the southeast. This process to return to the older name was completed in 2016.

This creek once was a breeding site for Pallid Sturgeons but the water in the creek and in the Missouri River has become too foul for that. This is the location of a Kansas City Hopewell archaeological site. Kansas City Hopewell is the westernmost variant of the Hopewell Culture of the Middle Woodland Period (100 BC - AD 700), a small village site with mounds. It was discovered during the construction of the road and bridge. Remains still are located around this area and up into the small valley, which is now the site of the J-6 Farms hog confinement. All archaeological sites are protected within the boundaries of the Iowa Reservation, so don't do any collecting!

One interesting note of caution: Different GPS systems often direct traffic to take this turn to head toward the tribal headquarters on a backroad up the hill past a hog farm. Do not take it! The road is not maintained regularly and is in generally poor shape, undriveable for any but 4WD vehicles. People try anyways because they trust the GPS or they think they know better, and they usually get stuck in the middle of nowhere with no phone reception. 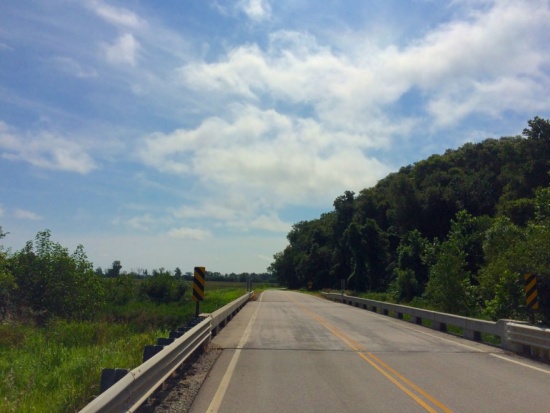