Long before Northville Downs became a reality (1947), Northville boasted a race track. At the turn of the century the property was purchased at Center and Seven Mile Road for a private nine whole golf course. A few years later a group of men, led by the late Ed Starkweather, started an "Athletic Park" on the site where harness racing occurred. Later, it was here that the Wayne County Fairgrounds were located.

Harness racing has been popular in Northville since the late 1800’s, when horse owners used to race their animals through the dirt on Dunlap Street. Organized racing at Seven Mile Road and Center Street began more than a century ago in 1902, when a group of local residents collaborated to buy a plot of land and mark a racetrack. This group formed the Northville Driving Club in 1907, and built the half-mile track through a series of “building bees” and free labor.

In 1916, a county fair was organized at what was to become Northville Downs. The fair operation grew, and the first grandstand was built in 1926- a wooden structure which could hold 2000 people. The fair and horse racing were closely affiliated for decades; the two functions shared the interest and involvement of community eiders, spectator bases and location. The relationship thrived until World War II, when wartime thrift slowed interest in fairs.

The close of World War II brought harness racing to Northville. A group of Buffalo investors approached the Northville Driving Club with the risky proposition of holding evening races. The Driving Club finally agreed, but first had to convince horse owners and trainers to race at night, under lights, something unheard of in the Midwest. Michigan’s first evening races were held on September 1, 1944. Racing was an immediate success. Thousands of racing fans made the 30 mile trek from Detroit to Northville via public transportation 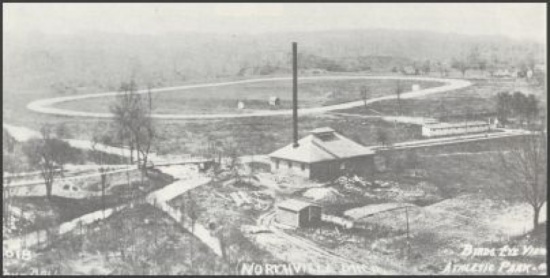