The Odell Hardware Company was founded on South Elm Street in Greensboro by Julian Odell in 1872 as a dry goods supplier. Reorganized through a sale in 1885 as a wholesale hardware business, the company grew to be one of the southeast’s largest independent hardware wholesale companies.

The Odell complex was constructed in several different phases. The earliest dates as early as the 1880s as a modest two-story brick building. In 1890, the Greensboro North State newspaper reported: The Odell Hardware Company are about to make a great improvement. Their business has attained such proportions and is daily increasing to such an extent that they are compelled to enlarge their present quarters. They will add another story to their present commodious building, increase the depth of the store sixty feet, making it 140 feet, and put in a new front which will be of iron and of the most beautiful design and architecture. The building will be four stories including the basement. This will be the first iron front ever erected in Greensboro.” This expanded façade is likely what was reconstructed in 1985 as the Odell Hardware Building.

In 1901, the narrow three-story brick office located just north of the imposing showroom was erected. Taking cues from Renaissance Revival architecture, the façade incorporates arched windows, molded brickwork, Louis Sullivanesque-terra cotta spandrel panels, and banded pilasters topped with Ionic capitals. The building is thought to have been designed by J. H. Hopkins, among the first professionally trained architects to practice in Greensboro. Warehouses were constructed for the company in 1897. The entire complex was destroyed by a massive fire on April 13, 1985, and are reconstructed elements using the original facades.

The Odell Hardware Company office building is an important in recalling a prosperous era in Greensboro’s history in which nationally popular architectural styles and professionally trained architects began to make a major impact on the appearance of the city’s main commercial thoroughfare. Private. 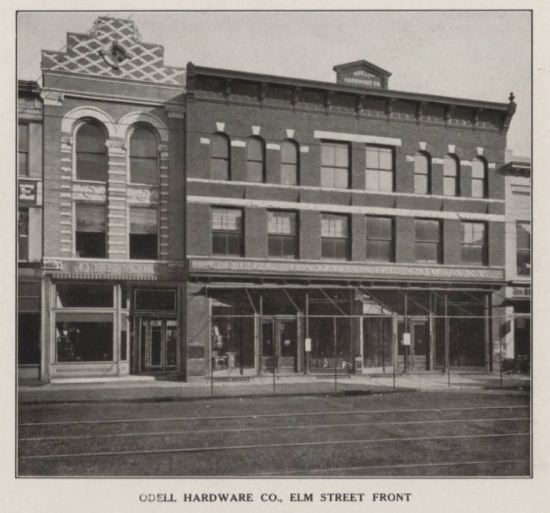