Our Lady of Lourdes Shrine

Our Lady of Lourdes Shrine

Our Lady of Lourdes Shrine- Continuing West along Walnut street through the intersection of 1st Street and the junction of Walnut and Perry Streets you will see the Lady of the Lourdes Shrine. Near the Shrine stood the St. Mary's Catholic Church. The church was easily recognizable during its time, as the word “Mary’s” was emblazoned on its slate roof. St. Mary also ran a catholic school that burnt down in the 1970s. The shrine serves as a strong representation of Shawnee’s catholic community, the shrine is connected to the hardships many residents faced in the 1950s as a result of a shrinking economy. Bishop Issenman of the Catholic Diocese of Columbus came to visit Shawnee in 1958 and was shown a new wall built by the church community in between the rectory and church. Issenmann thought there should be a statue placed at the end of the wall. In previous years, plans were made to revitalize the Old Stone Church as a historic landmark but never came to fruition. Father McEwan, of Shawnee, suggested the shrine be built from the stone hauled from the dilapidated Old Stone Church. The plan was to have 12 truckloads of stone, a stonemason, who also doubled as a parish member, and hire another unemployed and retired man at 10 dollars per day over a month to construct the shrine. In actuality, the project took three months and even more truckloads due to winter conditions and the trucks getting stuck in the mud. 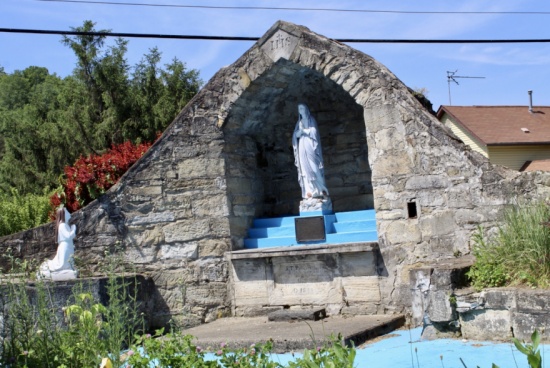