Benijah Aldrich Parmenter (nicknamed “Madge”) was born in Novi, Michigan on May 7, 1842. Originally from New York State, his parents were early settlers to the area. Benijah received his early education in a log schoolhouse and helped on his family’s farm. He enlisted in the US Navy in March of 1862 and served on board the USS Elfin until it was destroyed in battle on the Tennessee River. He then served on board the USS Cincinnati until the close of the Civil War.

After the war, he returned to farming in the Northville/Novi area and married Anna F. Guthrie in December 1867. Using his mustering out pay, he established Parmenter’s Mill on Baseline Road in 1873.

Originally, the mill was powered by a team of horses and produced vinegar. In 1880, the mill was powered by a threshing machine engine and ground up to 10,000 bushels of apples annually. Two years later, the mill began using a steam engine, which remained in use until 1910, when power was switched over to an electric motor. Parmenter’s produced mainly apple cider vinegar until 1953, but they also produced apple butter and apple cider. The Mill was run by five generations of Parmenter’s until it was sold. 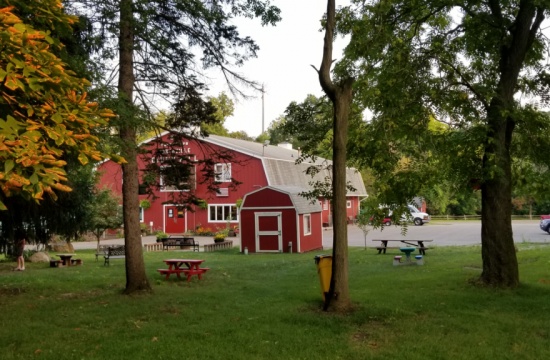