Purple Heart - Is awarded to members of the United States Armed Forces who are wounded during combat and to the next of kin in the name of those who are killed in action or die of wounds received in action. More information about the Military Order of the Purple Heart. (I will insert a lik to http://www.purpleheart.org)

The Purple Heart award is a heart-shaped medal within a gold border containing a profile of General George Washington. Above the heart appears a shield of the coat of arms of George Washington (a white shield with two red bars and three red stars in chief) between sprays of green leaves.

Insignia Symbolism - Yellow, the traditional cavalry color, and the horse's head refer to the division's original cavalry structure. Black, symbolic of iron, alludes to the transition to tanks and armor. The black diagonal stripe represents a sword baldric and is a mark of military honor; it also implies movement "up the field" and thus symbolizes aggressive elan and attack. The one diagonal bend and the one horse's head also allude to the division's numerical designation.

Background -The shoulder sleeve insignia was originally approved on 3 January 1921, with several variations in colors of the bend and horse's head to reflect the subordinate elements of the division. The design was authorized for wear by all subordinate elements of the division on 11 December 1934, and previous authorization for the variations was canceled. The insignia is worn subdued on-field uniforms after experience in Vietnam, where the gold was too conspicuous. Normally, the gold is changed to the base color of the uniform to subdue it.

The 1st Cavalry Division is one of the oldest units in the United States. 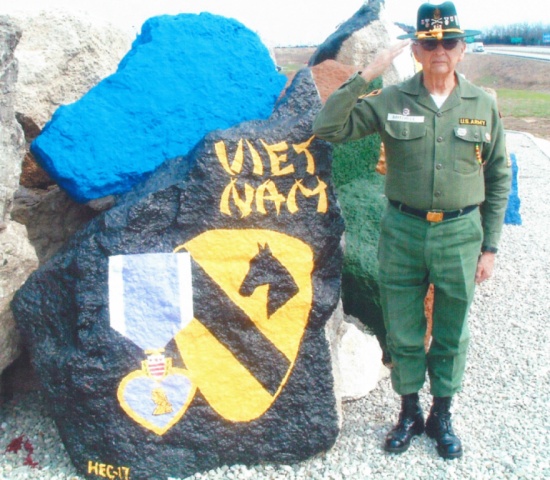