Theater at Rensselaer has a long history — the best record we have is dated November 25, 1929 and states: “The first regular meeting of the R.P.I. Dramatic Club was held Tuesday, Nov. 25, 1929 in the Proudfit Building.” And thus a club was born.

The meeting minutes dated March 12, 1930 also contain a significant turning point in the club’s history: “The question of a name for the club was brought up and a motion was passed to call it hereafter The R.P.I. Players.” These records exists today, as excerpted from the handwritten meeting minutes of the club.

The current Playhouse, a former U.S.O. building, was moved from Windsor Locks, Connecticut to Rensselaer in 1946. The building was acquired by the Institute to accommodate a library extension, study space and social activities. The structure was placed along 15th St. and thus dubbed the 15th Street Lounge or Lounge 15. In 1972, the lounge became the RPI Playhouse. The building underwent a major renovation in 1983.

In November 1983, the newly renovated RPI Playhouse opened with a production of West Side Story. Some additional spaces, like the costume shop and set shop, were added to the building during the renovation.

This point of interest is part of the tour: Rensselaer Polytechnic Institute Campus Free Roam Tour 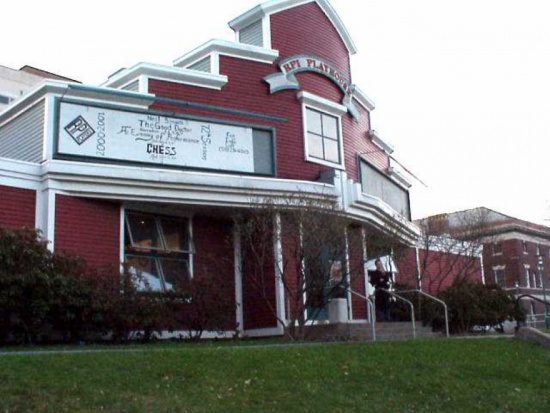