Look around you at the great house with its grassy lawns and big trees, and then turn to look across the road. This is where there would have once been views to the river and park, and down to Newbury. This whole landscape has been changed. It was created for the owners of Shaw House, so they could enjoy the views from their windows, have nice places to walk around, and could show off their property and wealth to any visitors and to the people who lived nearby. It has changed a lot since then though!

Shaw House was built in Elizabethan times by Thomas Dolman II (1543-1622) in 1581. Thomas Dolman II was a very wealthy cloth merchant and the son of Thomas Dolman I (c.1510-75), who bought Shaw Manor in 1554. The house is now Grade I listed, which means it is of exceptional interest and among the most important 2.5% of all the listed buildings in England! It was restored and reopened in 2006, and is now a venue for training, conferences and events, as well as a Register Office.

This gateway was installed in 1908, but the wrought iron overthrow (the archway above your head) was made in the 18th century. In 1907-8, Kathleen Farquhar (1850-1935), who owned Shaw House in 1905-1935, built a new boundary wall with high railings around the House. The new wall and gates may have replaced a ha-ha, which was filled in. Ha-has are ditches with vertical drops that stop animals wandering into the gardens of grand houses without spoiling the view, like walls and fences might do! The gateway is Grade II listed.

The way everything around us looks is because of the relationship between the landscape, plants, animals and people. Even places that might look natural are almost certain to have been shaped by people now or in the past.

Continue south, carefully crossing the road and go down the path opposite the gates, following the blue sign directing pedestrians to the Town Centre. When you get to the bridge over the River Lambourn, stop and have a look at the shape of the river channel. 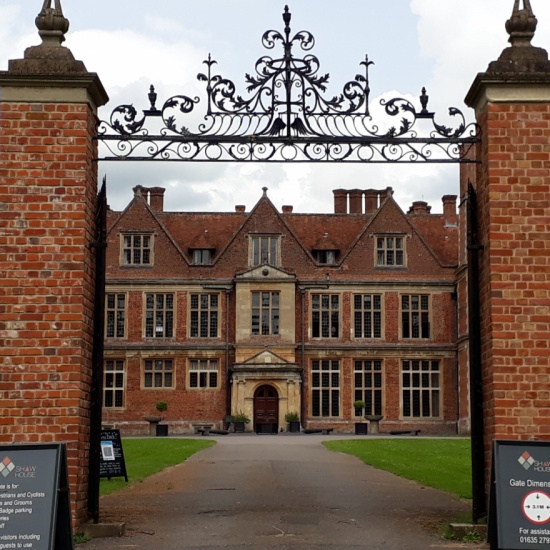