When you reach the third level on your way up the steps, you might want to detour off to the right or left for a look at the cannons. They are relics of the Spanish American War, taken from one of the ships that hometown hero Admiral George Dewey helped send to the bottom of Manila Bay. Kids love to climb on them and it is fine to let them do so.

As it is set on a hill, the State House escaped damage during the 1927 flood. The current building is the third on this site. The first was a very humble wooden building put up in the time of Jacob Davis after Montpelier became the capital. The legend is that the rough and tumble farming legislators who came to town for the winter literally whittled it into a ruin.

A second one was built between 1833-38 and looked more like the one you see today, although it had a lower, saucer-style copper dome that looked a bit like the Jefferson memorial in Washington.

It was constructed from granite brought from a quarry in Barre about twelve miles away. The loads were transported on wagons, each drawn by four horses and a yoke of oxen. That version didn’t last very long, either. In January 1857, after the boilers in the basement had been running at full steam over several days of frigid weather, some beams above the boiler overheated and started a fire that destroyed the building. All that remained were the portico and Doric columns and a few of the surrounding granite walls.

The third and present structure incorporated the portico, and the discoloration you see in the columns is a result of that 1857 fire. The new wooden dome was done more in the style of the nation’s capital and was originally painted a dark red. It wasn’t gilded until the early 20th century. 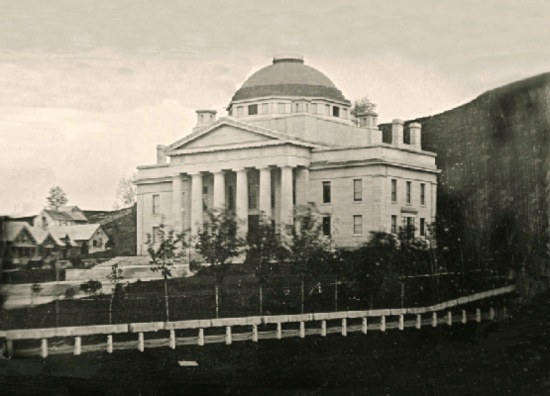