The Syndicate Block has the distinction of being the largest and oldest Sioux quartzite building in Pipestone's Commercial Historic District. It was built in 1884, a two-story building constructed at a cost of $25,000 for three separate owners. It has a pressed metal cornice running the length of both the south and east facade and supporting the pediment rising from the south facade. The pediment is embellished with a relief consisting of an Indian ceremonial pipe crossed with a bow and arrow.

The building originally housed three separate storefronts. Geyerman's, a women's clothing store, opened in the center storefront in 1935 and expanded into the corner storefront in 1964. They are now filling all three storefronts and the building to the west. The second floor has been used for many different professional offices, apartments, and early on, very briefly- a hotel. At one time there was a bowling alley in the basement.

The west and center storefronts both have one-story additions to the rear. The front facade has gone under several alterations, particularly on the first floor. An east entrance and display windows have also been bricked over. The pressed metal cornice was restored in 1979. 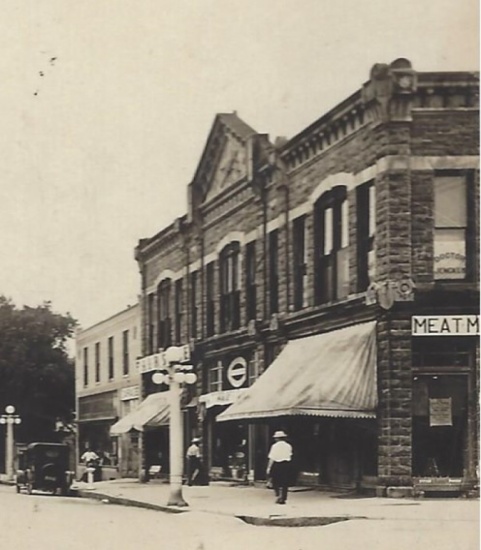