On the portico itself, to one side there is a statue depicting Ethan Allen, one of Vermont’s founding fathers and a Revolutionary War hero who led his Green Mountain Boys in the capture of Fort Ticonderoga. On the other side is a cannon captured by General John Stark at the Battle of Bennington in 1777.

Bennington Battle Day on August 16 is an official holiday unique to Vermont when all state offices are closed. The Vermont militia delivered such a blow to the British army at that battle that it was a major factor leading to General Burgoyne’s eventual surrender at Saratoga, which prompted France to enter the war as an American ally, which definitively turned the tide, and the rest is history.

So, you’re welcome. We’ll take the day off for that, thank you very much.

We will leave you here at the door to explore the interior of the State House on your own. This is a visit not to be missed. It is a piece of living history – a beautiful, lovingly preserved gem that looks very close to how it did when it was built. There’s no admission charge. There are self-guided tours you can operate with your smartphone, or you can get a printed version, and at times volunteers are available for guided tours.

Off the Beaten Path: If you’re visiting during the winter, there’s a tradition called Farmer’s Night, dating back to when the legislators were often farmers who came to town for the week. The Legislature is still only officially scheduled to be in session from January to April, a holdover from the time when the farmers had to get back home for the spring planting. Each Wednesday evening during that period, there is a concert or some other form of entertainment staged in the House of Representatives with the audience sitting in the legislators’ chairs. It is free to lawmakers and the public alike, and it keeps the representatives from whittling at the walls of our capitol building. 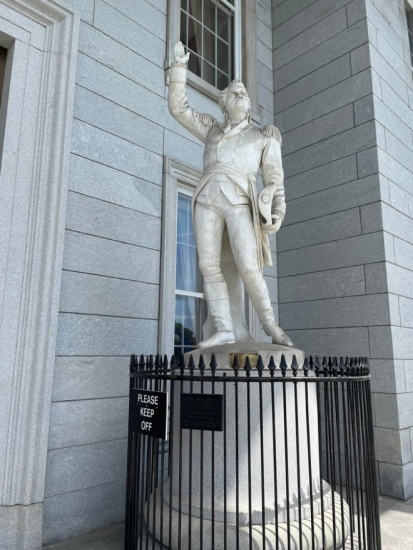